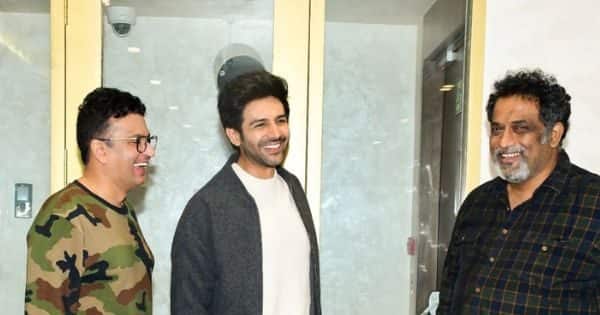 Kartik Aaryan Aashiqui 3: Bollywood actor Kartik Aryan has met director Anurag Basu and producer Bhushan Kumar. It is being told that the actor has discussed about the film ‘Aashiqui 3’.

bollywood star Karthik Aryan The third part of the blockbuster film Aashiqui ie ‘Aashiqui 3’ Will be seen in It was announced last September. Karthik Aryan’s film ‘Aashiqui 3’ Anurag Basu if you direct Bhushan Kumar The production company will produce T-Series. However, no information has been revealed about the actress of the film and there are no more updates related to the film. Meanwhile, Kartik Aaryan, Anurag Basu and Bhushan Kumar have been spotted at the T-Series office. Since then, speculations are being made that there would have been a discussion between the three about the film ‘Aashiqui 3’. Also Read – Drishyam 2 Box Office Collection Day 18: Ajay’s ‘Drishyam 2’ overtakes Karthik’s ‘Bhool Bhulaiyaa 2’, see figures

Karthik Aryan, Anurag Basu And Bhushan Kumar The picture is going viral on social media. People are commenting fiercely on this picture. Social media users say that in the film ‘Aashiqui 3’ Shraddha Kapoor To take only In this way, many people have spoken their heart. Significantly, ‘Aashiqui’ was released in the year 1990. The film featured Rahul Roy and Anu Aggarwal. Aashiqui 2 was released in the year 2013. The film starred Aditya Roy Kapur and Shraddha Kapoor. Both these films were well liked by the people. Along with this, people had given a lot of love to the songs of these films. Also Read – Karthik Aryan breaks his silence on Phir Hera Pheri 3

Let us tell that in September, Karthik Aryan shared a post from his social media account and informed about signing ‘Aashiqui 3’. Shared a short clip. In which the title ‘Aashiqui 3’ is written. In the background of the clip, Aashiqui’s popular song ‘Ab Tere Bin Ji Lenge Hum’ in Arijit Singh’s voice is playing. With this clip, Karthik Aryan has written, ‘Ab Tere bin ji legenge hum, zehar zindagi ka pe legenge hum… Aashiqui 3’. This would be heartbreaking. My first film with Basu da. Also Read – Good news for the fans of Akshay Kumar, ‘Raju’ will be seen with ‘Babu Bhaiya’ and ‘Shyam’ in Hera Pheri 3?

Talking about the work front, Karthik Aryan’s film ‘Freddy’ has recently released on the OTT platform. Alaya Furniturewala is also with him in this film. Karthik Aryan will now be seen in the film ‘Shahzada’, the film ‘Satyaprem Ki Katha’, the film ‘Aashiqui 3’ and the film ‘Captain India’.