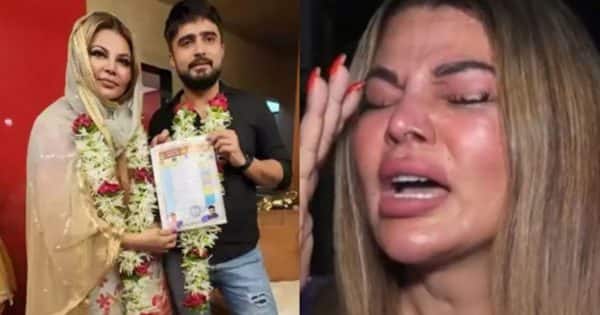 Rakhi Sawant Miscarriage: Rakhi Sawant is in discussion after coming out of Bigg Boss Marathi. After revealing her marriage, Rakhi has given another shocking news. Rakhi has told that she was about to become a mother but she had a miscarriage.

Rakhi Sawant Miscarriage: drama queen Rakhi Sawant Rakhi Sawant’s personal life has been in the news for a long time. In the past, Rakhi married her boyfriend Adil Durrani Everyone was surprised by announcing her marriage with (Adil Durrani), after which many ups and downs were also seen in her married life. At the same time, now Rakhi has given information about her pregnancy and miscarriage, knowing which everyone is surprised. Actually, Rakhi Sawant has revealed that she was pregnant but she had a miscarriage. Rakhi says that she had told about this in Marathi Bigg Boss too but no one believed her. Also Read – Mukesh Ambani extended his hand to help Rakhi Sawant’s mother, drama queen revealed

Celebrity photographer Viral Bhayani has shared a post on his official Instagram account, which has Rakhi Sawant’s photo with a heart broken emoji on it. It has been told with this post that he has had a conversation with Rakhi Sawant, in which the actress has revealed that she has had a miscarriage. The caption of the post reads, ‘Yes brother, I was pregnant and I announced this in Bigg Boss Marathi show as well, but everyone thought it was a joke and no one took it seriously.’ Next, Rakhi Sawant told that she has now miscarried. Let us tell you that in the past, Rakhi Sawant had said in an interview that if she does not live with Adil, then she will raise her child alone. Since then it was being claimed that Rakhi Sawant is pregnant.

Significantly, Rakhi Sawant has come out of ‘Bigg Boss Marathi Season 4’ some time back. It was only after coming out of the show that he came to know about the deteriorating health of his ailing mother. Along with this, the actress had also started doubting her boyfriend Adil, due to which Rakhi created panic among the media by sharing her and Adil’s photos. Both have been married for seven months and Rakhi has also changed her religion for Adil. After marriage, she has become Fatima and she herself has disclosed this fact. Also Read – Adil Khan apologizes to Rakhi Sawant with folded hands, the actress hugs her husband