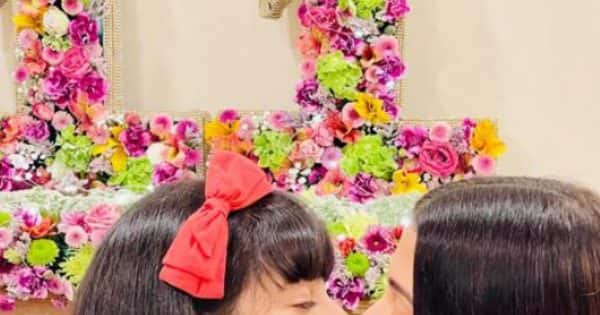 Aaradhya Bachchan 11th Birthday: On Aaradhya Bachchan’s 11th birthday, mother Aishwarya Rai shared a photo in which she is seen kissing her daughter. Aishwarya has come under target of trolls for this picture.

Abhishek Bachchan and Aishwarya Rai Bachchan Aishwarya Rai Bachchan’s darling daughter Aaradhya has turned 11 today. The granddaughter of Amitabh Bachchan was born on 16 November 2011. On the 11th birthday of Aaradhya Bachchan, Aishwarya and Abhishek are showering lots of love on their darling daughter. The actress has posted a photo from her Instagram account. In this picture, Aishwarya is seen kissing Aaradhya on the lips. Sharing this picture, the actress wrote in the caption, “My love, my life… I love you my Aaradhya.”

Mother Aishwarya’s Aaradhya Fans are liking this cute post done for. There has been a rush of comments from fans on this picture of the actress. Where most people are wishing Aishwarya’s daughter on her birthday, some people are also trolling Aishwarya for lip kissing her daughter. Commenting on this post of the actress, a user wrote, “Mother’s love.” So there another user wrote, “This is not the culture of India.” This post of Aishwarya Rai has been liked more than four and a half lakh times so far.

Abhishek-Aishwarya got married in the year 2007

Please tell that in the year 2008, actress Aishwarya Rai married Abhishek, son of Bollywood emperor Amitabh Bachchan. This marriage made headlines not only in the country but all over the world. The actress gave birth to daughter Aaradhya in 2011, after 4 years of marriage. The little granddaughter born in the house was named by Amitabh Bachchan himself. Also read: To tease Aditya Roy Kapur, Riya gave a lot of kissing scenes, this is how she took revenge of ‘Aashiqui’ from the actor

Aishwarya Rai is protective about her daughter