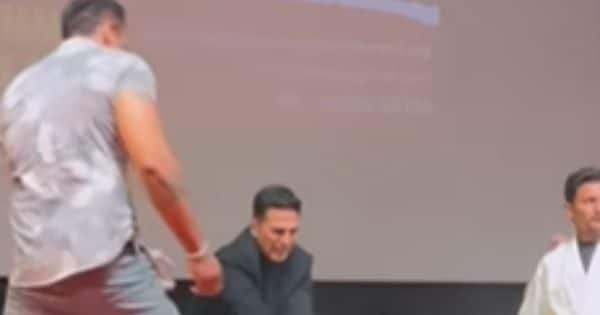 Akshay Kumar has shared a video on his social media account. In this, Akshay Kumar had come to attend the ‘Akshay Kumar 14th International Kudo Tournament’ in Surat, Gujarat.

Akshay Kumar Video : action star of bollywood industry Akshay Kumar The film ‘Ram Setu’ was released in theaters on Tuesday. People are liking this film and its result is clearly visible at the box office. Akshay Kumar’s film ‘Ram Setu’ has earned Rs 26.65 crore in two days. Meanwhile, a video of Akshay Kumar is becoming increasingly viral on social media. Fans are very fond of this video of him and are reacting fiercely.

Akshay Kumar has shared a video on his social media account. In this you can see that he had come to attend ‘Akshay Kumar 14th International Kudo Tournament’ in Surat, Gujarat. During this, Akshay Kumar is seen bursting big bricks. At the same time, a person was seen lying under these bricks made of cement. Along with this, he met the winners of the tournament and gave them awards. Let us tell you that Akshay Kumar has been organizing this tournament for the last several years. Significantly, Akshay Kumar specializes in Martial Arts, Karate, Taekwondo etc.