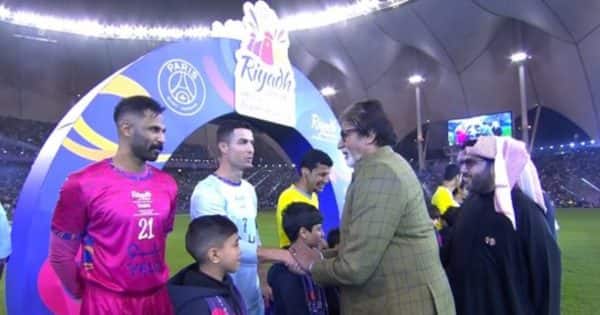 Amitabh Bachchan meets Ronaldo and Messi: emperor of bollywood industry Amitabh Bachchan (Amitabh Bachchan) is not dependent on any identity. Even at the age of 80, Amitabh is active in the film world and is always busy with his work. Apart from this, he has a strong fan following in the country and abroad. Wherever he goes He wins the hearts of the people. Not only this, he becomes the life of every event. Recently, an exhibition match was organized in Riyadh, the capital of Saudi Arabia, in which Paris Saint Germain (PSG) and Riyadh XI competed. Amitabh Bachchan attended the match as the chief guest, where Big B met Lionel Messi and Cristiano Ronaldo. Also Read – Pongal 2023: Not only in South but also in Bollywood, Pongal’s boom, from Amitabh to Jahnavi wished the fans like this

Actually, Amitabh Bachchan is very active on Twitter and he definitely tells his fans about every special moment. Recently, he has mentioned this match in his latest tweet and told that he enjoyed the match a lot here. He has shared four photos together on Twitter, in which he is seen meeting everyone. Two photos are of his welcome, in which everyone is seen welcoming the actor. In the third photo, he is seen with the players and in the fourth photo, the actor is seen with the football legend. Lionel Messi (Lionel Messi) Cristiano Ronaldo (Cristiano Ronaldo) and Kylian Mbappe (Kylian Mbappe). This last photo is becoming fiercely viral on social media. Also Read – Jaya Bachchan got angry on taking a photo and said- ‘To such people…’, the actress’s class started when the video went viral

T 4533 – “An evening in Riyadh .. ” what an evening ..
Cristiano Ronaldo, Lionel Messi, Mbape, Neymar all playing together .. and yours truly invited guest to inaugurate the game .. PSG vs Riyadh Seasons ..
INCREDIBLE!!!#football #Ronaldo #Messi #AlNassr #SaudiArabia pic.twitter.com/ZD2OUEb3F7

Big B was last seen in this film

Talking about Amitabh Bachchan’s work front, the actor was last seen in the film ‘Unchai’, which got a decent response from the fans. In this film he was seen with actors like Anupam Kher, Neena Gupta, Boman Irani. Also Read – After the marriage of these stars of Bollywood, luck shone overnight, Shah Rukh Khan’s name is also included in the list