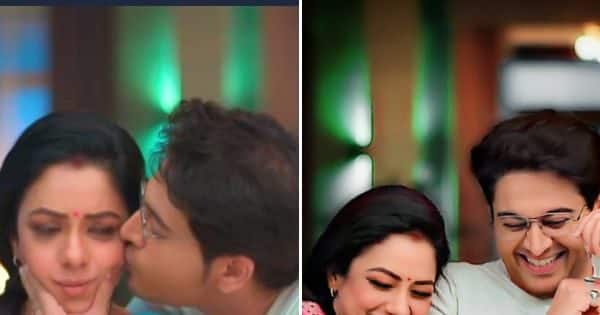 Anupama-Anuj Romance Impress Fans: Anupama and Anuj’s romance was shown after a long time in ‘Anupama’. Both were seen kissing each other while making sweets, seeing which the hearts of the fans also became garden-garden.

Anupama: TV’s explosive show ‘Anupama’ is making a lot of noise on the small screen along with the TRP list. To make this scintillating show of Rupali Ganguly number one in the TRP list, the makers are showing the wedding track of Pakhi and more. in this track Anupama (Anupama) has left no stone unturned to grab headlines with its impeccable style. At the same time, this show of Rupali Ganguly is trending a lot on Twitter. Actually, Anupama and Anuj’s romance was shown in the show after a long time. Both were seen kissing each other while making sweets, seeing which the hearts of the fans also became garden-garden.

They are playing with the flour and he applies some on her so that he could taste her sweet red lips but he initially licks her on cheek teasing her, she closed her eyes because of this anticipation and feel the level of desire,passion and love
,#MaAn #Anupamaa #AnujKapadia pic.twitter.com/32vHpHsON0


Entertainment full of’AnupamaIt was shown in Anupama that while making sweets, flour gets applied to Anupama’s face. To clean it, Anuj steps forward and kisses Anupama on her cheek. Anupama is stunned by Anuj’s move, but being blown away by the romance, she again smears flour on her cheek. But Anuj does not pay attention to her, due to which she starts cleaning the dough. In such a situation, Anuj holds her hand and kisses her again. Photos and videos of both of them are becoming fiercely viral on social media as well.

My #MaAn babies
how cute and beautiful they look when they smile
Thu thu thu #Anupamaa #MaAn #AnujKapadia pic.twitter.com/zZUjCJCn24

Anupama Anuj’s romance melted the hearts of the fans
Fans were also excited to see the romantic style of Anuj and Anupama. One user wrote, “The newly wed couple behaving like a girlfriend and boyfriend to Mr and Mrs. Nice.” Another user wrote, “Assuming you will always be a newly married couple for us.” One user described Anupama and Anuj as the expression king and queen and wrote, “It would not be wrong to say that Anupama and Anuj Kapadia are the kings and queens of expressions. Their eyes always say something and I also melt after seeing this cheesy romance of theirs. I go.” Do not take off your crown of this newly married couple.