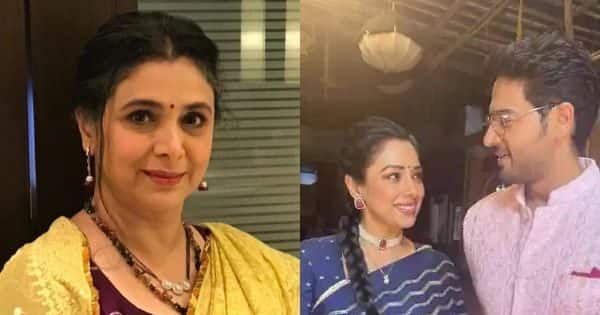 Anupama: Regarding Rupali Ganguly and Gaurav Khanna starrer ‘Anupama’, it was reported that Supriya Pilgaonkar’s entry in the show is going to happen soon, which can create new problems in Anupama’s path. Now Supriya Pilgaonkar herself has broken the silence on this matter.

Anupama: Rupali Ganguly’s bang show ‘Anupama’ has left no stone unturned to win the hearts of the people. In Rupali Ganguly and Gaurav Khanna starrer ‘Anupama’, the makers are constantly bringing many such twists and turns to make the fans happy, which has taken the excitement of the fans to the seventh heaven. These days ‘AnupamaIt is shown in (Anupama) that Anupama has taken admission in the college and she is also very excited to complete her further studies. In the midst of all these twists and turns, there was news about ‘Anupama’ that the famous TV actress Supriya Pilgaonkar may enter the show. However, now the actress herself has also broken the silence on this matter.

full of entertainmentAnupamaRegarding (Anupama), it was being said that Supriya Pilgaonkar would enter the show as Anupama’s teacher who would try to obstruct Anupama’s path. However, breaking the silence on this matter, Supriya Pilgaonkar has told that she has neither auditioned for any show nor has she received any call regarding the show. Speaking to E-Times Supriya Pilgaonkar said, “It’s shocking to me. It’s not true. I had read about it on the internet and I myself wondered how people could make up such stories. Huh.”


Rupali Ganguly Talking about the show ‘Anupama’, Supriya Pilgaonkar further said, “Neither have I received any call from the production house nor have I given any audition. It is a very interesting show and when I went to London, People were asking me a lot about it. I myself like to watch this show, but I haven’t been called for ‘Anupama’ yet. I got many offers after ‘Sasural Genda Phool 2’ but I didn’t want to. Wanted to take a break. Now I will be back on TV very soon.”