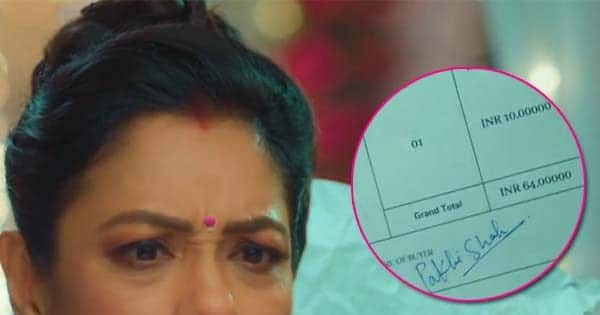 Netizens slams Anupama’s makers for doing big mistake: The upcoming episode of Star Plus’ popular TV show Anupama is going to be a big bang. Meanwhile, people have caught a big mistake of the makers and with this, there is a lot of hue and cry on social media.

Anupama’s makers big mistake in Pakhi’s sangeet ceremony: In Rupali Ganguly and Sudhanshu Pandey starrer Anupama, the Shah family is busy with Pakhi’s pre-wedding function these days. In the current episode of Anupamaa, Pakhi’s sangeet ceremony is going on and in the meantime, Barkha too is not deterring from playing new tricks. Talking about the upcoming episode of Anupama, the audience is going to get a double dose of entertainment. In fact, in the new episode, you will see that Barkha will lure Pakhi with jewelery worth lakhs in the midst of the sangeet ceremony. Makers have made such a mistake in the middle of this track that now there has been an uproar on social media. Let’s know what is the whole thing after all?

Let us tell you that in the upcoming episode of Anupama, it will be shown that Barkha will give jewelry worth about 64 lakhs to Pakhi in the midst of the Sangeet ceremony. Not only this, Barkha will also get Pakhi to sign the bill. More will see all this and he will fiercely class Pakhi in front of Barkha. In anger, he will throw the bill on the spot. Anupama will also reach there from behind and the bill will be in her hands. Seeing the bill, the ground will slip under Anupama’s feet. Meanwhile, the makers have made such a mistake that you too will be left wondering after watching the next episode of Anupama.

Where did the mistake happen?

In this superhit show of Rupali Ganguly, when Adhik will angrily tell four things to Pakhi, you will see a bill of 64 lakhs in her hand. As soon as this bill is handed over to Anupama, four lakhs would have been deducted from it. Users on social media are even making fun of the name of the shopkeeper mentioned on the bill.

Details guys? ….first it was ₹6400000 and then after its crumpled it’s ₹4 lacs short ….how the hell..?? and at first Pakhi Shah then Pakhi Mehta…waah? And look at the shop from above, whose is it?? Adhik very bad never crumple again…? #anupamaa pic.twitter.com/OvFOPleBbs

Who is getting fired for such continuous blunders @IAmRajnShahii @ketswalawalkar , Again, Y dont u get some FD members as consultant 4 quality chks… which btw seems to be missing continuously? for top rated shows. Such low image of Indian TV Industry???

Watch the glimpse of the upcoming episode of Anupama below

There was a mistake in Kinjal’s pregnancy

The makers of Anupama have made such a big mistake some time ago. It was during the track of Kinjal’s pregnancy that the makers took a leap of 7 months in the show. Kinjal was a few months pregnant before the leap and even after the leap, the matter did not progress further. In such a situation, the makers of Anupama had a lot of flak on social media. For the time being, let us tell you that many interesting twists are coming one after the other in Anupama. In the sangeet ceremony itself, Anupama will ask Pakhi and Adhik to leave the Kapadia house in front of everyone.