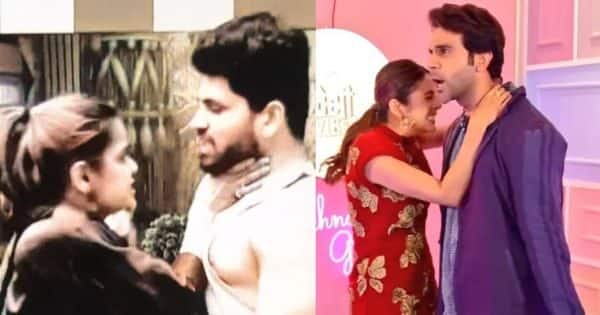 Shehnaaz Gill Grab Rajkumar Rao Neck: A video of Shehnaaz Gill is becoming fiercely viral on social media, in which Shahnaz was seen holding the actor’s neck. On seeing this video, people remembered the fight between Shiv Thackeray and Archana Gautam.

Shehnaaz Gill Grab Rajkumar Rao Neck: Punjab’s Katrina Kaif i.e. Shahnaz Gill is in the news a lot these days. Shehnaaz Gill has recently started her talk show, for which she is getting a lot of congratulations from fans and celebs. Shahnaz Gill Rajkummar Rao also became a part of the talk show. But recently a video of him and Shahnaz Gill is becoming fiercely viral on social media, in which Shahnaz Gill was seen holding the actor’s neck. On seeing this video, people felt like Shiv Thackeray and Archana Gautam I remembered the quarrel, in which Archana held Shiva’s neck in anger.

by Rajkumar Rao Shahnaz Gill With this video has been shared on his Instagram account, which has been viewed more than three lakh times so far. In the video, Rajkummar Rao and Shehnaaz Gill first show love to each other and then talk about killing. Both also dance, but Shahnaz’s anger increases so much that she grabs Rajkumar Rao’s neck. Fans also liked the fun of both of them in the video. Sharing this video, Rajkummar Rao wrote, “Monica Shahnaz Monica Shahnaz, whom should I pay attention to? It was a lot of fun talking to you and the dance track was my favourite.”

Let us tell you that this video of Shahnaz Gill and Rajkumar Rao is getting a lot of love from the fans too. Praising Shehnaaz, a user wrote, “You both look very cute together.” Another user wrote, “Two clean hearted talented people together.” Shehnaaz Gill’s fan praised her and wrote, “Now we will get to see Shahnaz without a filter every week.”

What was the case of Shiv Thackeray and Archana Gautam