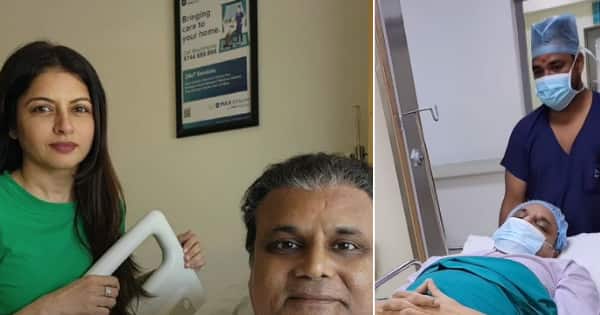 Actress Bhagyashree, who has shown her flair from Bollywood to TV, lives in a lot of headlines about her personal life. She often shares pictures with her husband from her Instagram handle. meanwhile Bhagyashree Himalaya Dasani has shared some pictures and a video. In these pictures and videos Himalaya Dasani Appearing in the hospital. After seeing this, the fans were a little surprised. For information, let us tell you that Bhagyashree’s husband had sustained injuries on his shoulder, which was undergoing treatment. Now her husband has undergone shoulder surgery. About this, the actress has told the fans by sharing the post on her Instagram. After seeing this, the fans got a little upset and started praying for the husband of the actress. Now the pictures and videos shared by Bhagyashree are becoming fiercely viral on social media. So let’s see without delay the pictures and videos shared by Bhagyashree

Bollywood actress Bhagyashree has played an important role in Salman Khan’s film Maine Pyar Kiya. Apart from this, the actress was also seen as a judge in the TV dance reality show ‘Dance India Dance Mom 3’.