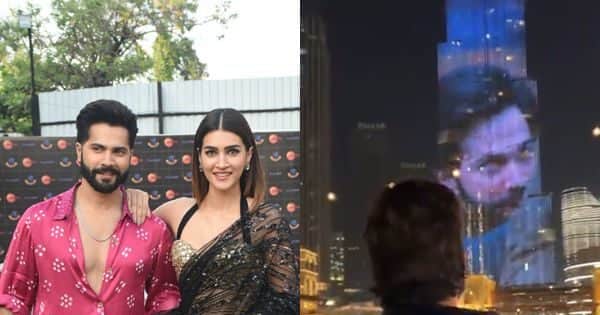 Bollywood stars Varun Dhawan And Kriti Sanon my upcoming film ‘Wolf’ (Bhediya) Do not want to leave any gap in the promotion of Both these stars are constantly busy promoting their film. Not even a week is left for the release of the film. Meanwhile, the trailer of Varun Dhawan and Kriti Sanon’s film ‘Bhediya’ was shown on Dubai’s most popular building Burj Khalifa. Both the stars have shared its video on their social media accounts. After this, the fans of both of them are very excited about the film. Also Read – Bhediya Pre Release Promo: Before the release, the new promo of ‘Bhediya’ surfaced, Varun Dhawan’s acting blew the senses

Varun Dhawan And Kriti Sanon Has shared one video each from his Instagram account. In these videos, you can see that the trailer of his upcoming film ‘Bhediya’ is being shown on Dubai’s most popular building Burj Khalifa. At the same time, Varun Dhawan and Kriti Sanon are also seen enjoying with the public in the video. Along with this, both these stars are seen meeting their fans. Also Read – After Alia Bhatt-Varun Dhawan, now Karan Johar will make this starkid a superstar, know his name

‘Bhediya’ to release on November 25

Varun Dhawan and Kriti Sanon’s film ‘Bhediya’ is scheduled to release in theaters on November 25. The film will be released in Hindi, Tamil and Telugu. The film will be released in 2D and 3D. This film has been directed by Amar Kaushik. At the same time, the film has been jointly produced by Geo Studios and Maddock Films. Also Read – Varun Dhawan and Kriti Sanon went out to promote Bhediya, paps caught on camera like this