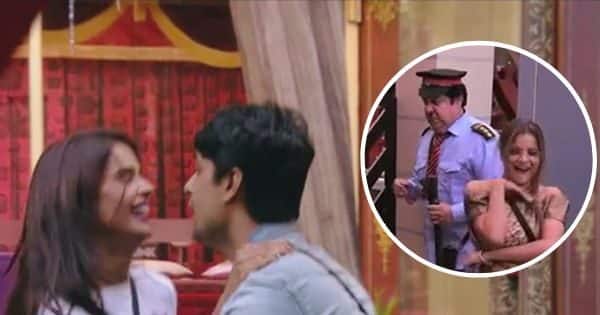 Bigg Boss 16: A promo video related to ‘Bigg Boss 16’ has been released, in which the contestants were seen imprisoned in the hostel. In the promo, where Priyanka was seen with Chahar Chaudhary, Ankit Gupta, Archana Gautam was seen scolding Sajid Khan.

Bigg Boss 16: Bollywood’s famous actor Salman Khan has left no stone unturned to create a ruckus through his show ‘Bigg Boss 16’. At the same time, to make the show entertaining, Bigg Boss is also continuously giving such tasks to the contestants, due to which the interest of the audience is also increasing a lot. recently ‘Bigg Boss 16’ A promo video related to this has been released, in which the contestants were seen imprisoned in the hostel. Where there were girls on one side, there were boys on the other side. During this, the contestants made the house of Bigg Boss 16 a den of romance. Where Priyanka Chahar Chowdhary, Ankit Gupta While seen with, Archana Gautam was seen lashing out at Sajid Khan. Also Read – Katrina Kaif will reach the house of Bigg Boss 16 as a ghost, will share screen with Salman for the first time after marriage


‘Bigg Boss 16’ It was shown in the promo video of the boys that the boys had to convince the watchman turned Sajid Khan and take their message to the girls. In the promo video where Abdu Rojic and Nimrit Kaur Ahluwalia were seen getting romantic with each other. So there Priyanka and Ankit were also seen secretly meeting. Apart from this, Shiv Thackeray also did not leave any chance to romance with Gori Nagori. In the promo video of ‘Bigg Boss 16’, Sajid Khan was also seen saying, “Hey Bhaisahab Jiya is desperate, Mini nahi pagar hai tak hai.” On this matter, Archana Gautam starts teasing him, which makes Sajid Khan Sharma jealous. Also Read – Ormax Top TV Shows: ‘Gum Hai Kisi Ke Pyaar Mein’ and ‘Bigg Boss 16’ fight, ‘Anupama’ also explodes bomb

Entertainment After watching the full promo video of ‘Bigg Boss 16’, the fans also appeared very excited. Commenting on the promo, a user wrote, “And here’s Big Boss having all the fun.” So there a user targeted Tina Dutta and Gautam Vij. The user wrote, “Tina and Gautam is something special, Tina is still fine but Gautam… Priyanka is the best here.” At the same time, a user took a jibe at Sumbul Tauqeer Khan and wrote, “There is no one here for Sumbul.” Also Read – Kirron Kher told Bigg Boss 16 host Karan Johar as Anarkali, said ‘Mujra kar…’