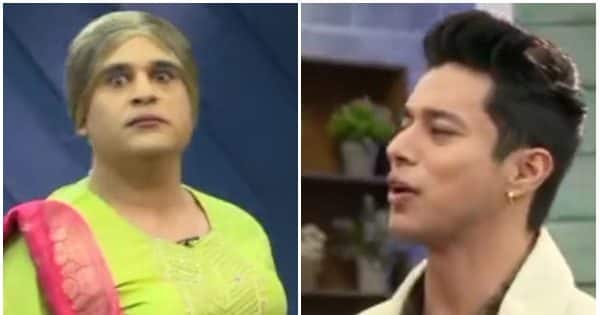 Pratik Sehajpal-Krushna Abhishek on Shalin-Tina chemistry: The TV reality show Bigg Boss 16, which airs on Colors TV, is making a lot of noise these days. These days a new love story seems to be brewing in this controversial TV reality show of Bollywood superstar Salman Khan. Bigg Boss 16 contestants Tina Dutta and Shaleen Bhanot are seeing a lot of love these days. Although some people are giving it the tag of Fake Love Story, some people really call their relationship serious. Well, how strong their relationship is, it will be known only after Bigg Boss exits the house. At present, the on-screen chemistry of Tina Dutta and Shaleen Bhanot has surely come into the limelight these days. Now recently, comedy star Krishna Abhishek and ex-Bigg Boss contestant Prateek Sahajpal have made fun of the chemistry of these two. Whose video is going viral in the internet world. Also Read – MC Stan to be evicted from Bigg Boss 16? Will give this much money to the makers

Pratik Sehajpal and Krushna Abhishek in Bigg Boss gossips Bigg Buzz on Voot Tina Dutta And Shaleen Bhanot Mimicry of During this, Krishna Abhishek was seen in the avatar of Tina Dutta, while Pratik Sahajpal was seen showering love on her as Shalin Bhanot. Krushna Abhishek in the role of Tina Dutta was seen hugging Prateik repeatedly keeping the camera in mind. While Prateek Sahajpal made everyone laugh with his superb mimicry of Shaleen Bhanot. You can watch this video here. Also Read – Bigg Boss 16 will see the entry of this actor of ‘Gum Hai Kisi Ke Pyar Mein’, another name surfaced

Omg this is next level?they are doing mimicry of shalu tuna???pic.twitter.com/5w40zg52wB

The interesting thing is that during this time internet users have enjoyed a lot on this chemistry of Shaleen Bhanot and Tina Dutta, seen in the role of Prateek Sahajpal and Krishna Abhishek. One user commented and wrote, ‘Next level tha bhai’, so many users are praising Prateek Sahajpal’s acting by commenting on this video. See comments. Also Read – Priyanka Chahar Chowdhary and Archana Gautam’s entry in Naagin 7? Ekta Kapoor approached!

Haha Bb Show Ending Means Tina And Shalin They Must Watch This And They Are Going To Angry?? so funny

Omg!!! I can’t stop laughing???
So wish that bb shows this clip to the hms

Their love chemistry was also questioned in the Weekend Ka Vaar special episode. When raising questions on their chemistry, the general audience who came to the house asked sharp questions to both of them. After this, both of them got agitated over the questions raised on their relationship. Now in the upcoming episode Shaleen-Tina are going to propose love.