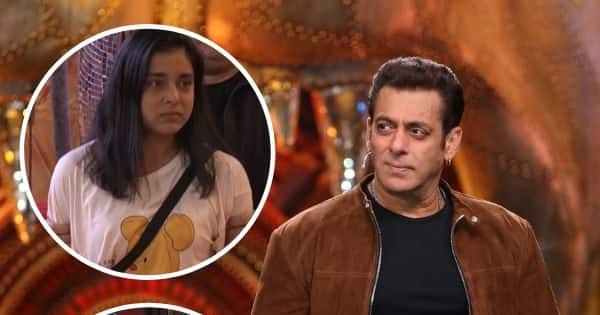 Bigg Boss 16 Salman Khan Angry On Sumbul Touqeer Khan: In Salman Khan’s explosive show ‘Bigg Boss 16’, it will be further shown that Salman Khan will be enraged after seeing Sumbul’s attitude towards Shaleen Bhanot. At the same time, the actress will also beg and demand to go home.

Big Boss 16: Colors TV’s explosive show ‘Bigg Boss 16’ is on the small screen these days. Salman Khan Along with the fights of the contestants in Salman Khan’s explosive show, his game has also left no stone unturned to entertain the people. But on the last day there was a ruckus in Bigg Boss 16. Actually, MC Stan and Shaleen Bhanot (Shalin Bhanot) had a fierce fight. The matter escalated so much that both got into a scuffle. But the matter did not rest here. Tina Dutta and Sumbul Touqueer Khan clash with each other after Shaleen and MC Stan’s fight. At the same time, a video related to Bigg Boss 16 is going viral, in which Salman Khan was also seen taking Sumbul Tauqeer Khan’s class. Also Read – Bigg Boss 16: Due to Tina Dutta, there was a fierce fight between Shaleen Bhanot and MC Stan, Shiv Thackeray also cleared his hands

Salman Khan Salman Khan’s big bang show ‘Bigg Boss 16’ showed on the previous day that Tina goes to Shaleen after a fight between MC Stan and Shaleen Bhanot. She tells him that it was Shaleen’s fault as she was the one who initiated it. Sumbul starts screaming when the actress says that she could not see the mistake of MC Stan. Tina first tries to pacify her, but later she too flares up and starts leaving. When Shaleen tries to stop him, Sumbul grabs him from behind. Seeing this style of Sumbul Tauqeer Khan, Tina Dutta’s anger rises further. She says, “Itna kya alert hona yaar kisi ki liye. Also Read – Bigg Boss 16 Promo: MC Stan loses his temper on Shaleen Bhanot’s ‘abuses’, boxing inside the house

she’s tried to explain that she’s just friends. she doesn’t have any feelings for him. salman just shut up manh don’t irritate us pls… evict sumbul and you guys pls play with your shalin and tina.. spear my girl pls.. she’s just 19.. don’t ruin her image.#SumbulTouqeerKhan pic.twitter.com/CGRAup72k8


‘Bigg Boss 16’In the viral video of (Bigg Boss 16), now Salman Khan was also seen lashing out at Sumbul Touqueer Khan and Shaleen Bhanot. Salman Khan said about Sumbul, “Sumbul is obsessed with Shaleen and he knows it very well.” Tina Dutta also says yes to Salman Khan’s talk. While Sumbul cries and begs, “I want to go home.” To this Salman Khan replies, “Chali jao, roka kisne hai.” Also Read – Bigg Boss: These contestants were determined to kill each other, had made everyone’s life difficult by fighting

Shalin Bhanot will also be homeless

In the promo video of ‘Bigg Boss 16’, it was shown that Salman Khan gets angry even on Shaleen Bhanot. Actually, he says that once Salman should give permission to fight with MC Stan. Bhaijaan’s anger rises on this and he replies, “If I speak, will you kill me here.” And when Shaleen Bhanot says that either I will stay in the house or MC Stan, Salman also replies, go away, nobody stopped you here.