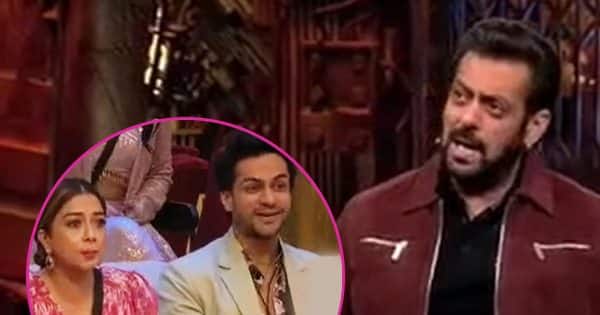 Bigg Boss 16 Promo Vidoe: Bollywood superstar Salman Khan is all set to take a class on Tina Dutta and Shaleen Bhanot in the upcoming Weekend Ka Vaar special episode. Along with this, the film star will give a challenge to both of them. Watch video.

Bigg Boss 16 Promo Vidoe: Bollywood superstar Salman Khan’s controversial TV reality show Bigg Boss 16 is going to witness a lot of uproar in the upcoming episodes. In the upcoming Weekend Ka Vaar special episode of Bigg Boss 16, this time the makers have called the die hard fans of the show. These viewers of Bigg Boss are going to ask sharp questions to actresses Tina Dutta and Shalin Bhanot as well as Archana Gautam and Priyanka Chahar Chowdhary. The makers of the upcoming episode of the TV serial Bigg Boss have released a video showing a glimpse. In which the audience is seen questioning the members of Bigg Boss. During this, an audience is seen questioning the chemistry of Tina Dutta and Shaleen Bhanot. Also Read – Ankit Gupta becomes the new captain of Bigg Boss 16? Sumbul Taukeer’s plan ruined

the audience Tina Dutta And questioning their chemistry with Shaleen Bhanot, he said,decent Why do you always run after Tina.’ On which Salman Khan jokingly says what to do is habit. Shaleen gives his clarification on this. While a bystander tells actress Tina Dutta, ‘Tina uses her for her own benefit’. Actress Tina Dutta gets angry on this and she says that she will not even talk to Shaleen from now on. Because it is taking a heavy toll on them. Superstar Salman Khan, having fun on this talk of Tina Dutta, says that now he has to see this. They openly challenge the actress to do so. Watch the video here. Also Read – Bigg Boss 16 Promo: There will be ruckus in Salman Khan’s show due to captaincy, Sumbul Taukeer will get angry on Priyanka

Sumbul Taukir Khan’s leaf will be cut this week?

Here, with the Weekend Ka Vaar, the question arises that this time which member is going to be evicted from the house. If media reports are to be believed, a tarot card reader has claimed that actress Sumbul Taukir Khan may be evicted from Bigg Boss house soon. Whereas, some media reports claim that no one is going to be eliminated this week. In such a situation, the other nominated members including Sajid Khan and Sumbul will get a sigh of relief. Also Read – Salman Khan’s new pictures blow up on social media, people go crazy after seeing the swag of ‘Bhaijaan’