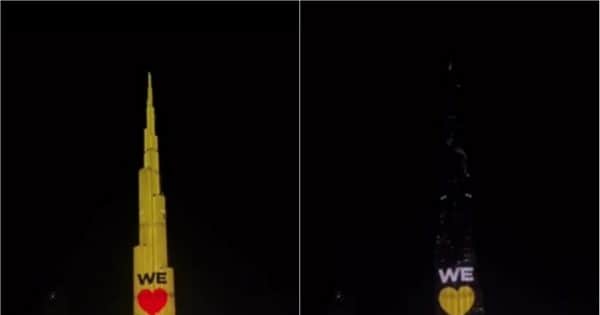 Shah Rukh Khan Feature On Burj Khalifa: The stardom of the King of the industry i.e. Shah Rukh Khan is spread not only in the country but also abroad. on 2 November Shahrukh celebrated his 57th birthday, this birthday of the actor was very special. Not only on Shahrukh Khan’s birthday like every year, this time too, a crowd of fans gathered outside ‘Mannat’ to congratulate King, but the actor also released the teaser of his upcoming film ‘Pathan’, making the fans big. Gave a gift Like every year, this year also the world’s tallest building Burj Khalifa was illuminated on Shahrukh’s birthday.

A video has been posted from the Twitter handle of Burj Khalifa. In which the world’s tallest building reads, “Happy Birthday Shahrukh Khan, Happy Birthday Pathan, We Love You.” Also, in the background of the video, the song ‘Tujhe Dekha Toh Yeh Jaana Sanam’ from the actor’s superhit film ‘Dilwale Dulhania Le Jayenge’ is playing. Sharing this video, it is written, “On the occasion of the birthday of the great Bollywood star Shahrukh Khan, the scintillating Burj Khalifa. Let’s wish him a very happy birthday.”

#BurjKhalifa lights up in celebration of the birthday of the great Bollywood star, Shah Rukh Khan’s! Lets wish him a Happy Birthday pic.twitter.com/1Q55agSjXa

The teaser of ‘Pathan’ was released to surprise the fans.

Let us tell you that on the occasion of his birthday, Shah Rukh Khan gave a big surprise to the fans by releasing the teaser of his upcoming film ‘Pathan’. Directed by Siddharth Anand, the film will release on January 25 next year.