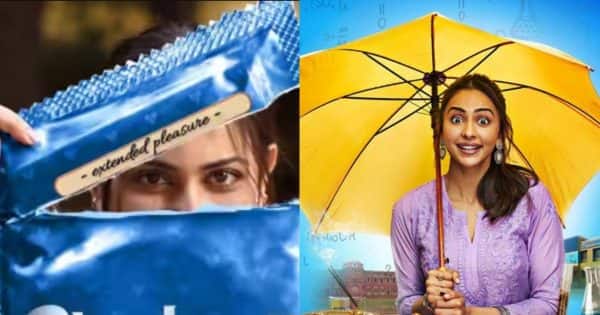 Chhatriwali Twitter Reaction: Rakul Preet Singh starrer film ‘Chhatriwali’ has been streamed on ZEE5. In this film, the actress played the role of a condom tester. Rakul’s acting in the film won the hearts of the fans.

Chhatriwali Twitter Reaction: Rakul Preet Singh is one of the versatile actresses of Hindi cinema who fits into every character. She has worked in many brilliant films and now actress film ‘umbrella’ (Chhatriwali) has also been streamed on the OTT platform Zee5. This film seems to be giving education to the audience on physical relations. In this, actors like Dolly Ahluwalia, Satish Kaushik, Prachi Shah and Riva Arora have been seen along with Rakul Preet Singh. The story of the film is about Sanya, a resident of Haryana, who explains condoms to the neighbors. However, how did the film go down to the audience? Let us tell you now.

In the film ‘Chhatriwali’ Rakul Preet Singh (Rakulpreet Singh) has played the role of Sanya, who is first a chemistry tutor and then in the film she starts working as a condom tester. However, no one in the house knows about Sanya’s job. But she gradually starts convincing the people around her about it. Fans are liking Rakul Preet Singh’s acting as Sanya in this film. The work of the actress is being praised on Twitter. So some people are also liking the story of the film. A fan wrote, “Just watched Chhatriwali on Zee5, it was awesome and Rakul ma’am… Your acting in the movie was lovely and the movie was amazing and you are the only reason for me to watch this movie.”

Just watched #chhatriwali on Zee5 it was awesome and Rakul Mam♥️♥️…your acting was lovely in the movie and the movie was extremely awesome and the one and only reason for me to watch this film is you Rakul ji?♥️♥️@Rakulpreet @tejasdeoskar@vyas_sumeet #ChhatriwaliOnZEE5 pic.twitter.com/JU9EkUbKdr

Just watched #ChhatriwaliOnZEE5@Rakulpreet handled very well except 5-10 mins everything is good
A very well directed movie
And rakul ❤️ a bow for your guts.
I’ve seen something new style of expressions in this movie which are pretty good#Evolving as an actor
keep going

Please inform that Rakul Preet Singh starrer film ‘Chhatriwali’ has been directed by Tejas Vijay Devskar. However, this is not the first film on sex education. Earlier, Nushrat Bharucha was also seen in the film ‘Janhit Mein Jaari’ talking about condoms. Nusrat played the role of a condom seller in this film.