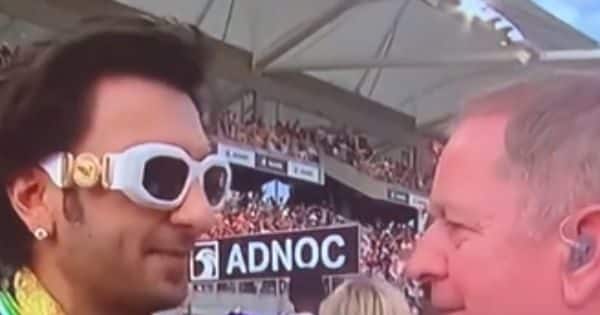 Ranveer Singh Video: A video of Bollywood actor Ranveer Singh is going viral on social media. In this video you can see that Ranveer Singh has reached Abu Dhabi to watch the F1 race. He could not recognize a celebrity here.

Bollywood actor Ranveer Singh Along with his acting, he is known for his unusual style. Ranveer Singh’s fan following is not only in the country but all over the world. Despite this, such an incident happened recently which people are surprised to know. Actually, Ranveer Singh had arrived in Abu Dhabi to watch the F1 race. During this, Ranveer Singh was a former Formula Racing driver and met the host of the show, Martin Brundle. During this meeting, Mordin Bundl could not recognize Ranveer Singh. A video of this is going viral on social media.

Ranveer Singh’s way of introducing himself

@RanveerOfficial you have killed it on the grid walk at the Abu Dhabi F1 #f1 #RanveerSingh #DeepikaPadukone #SkyF1 #martinbrundel #Bollywood #AbuDhabiGP pic.twitter.com/erOjPaptoU