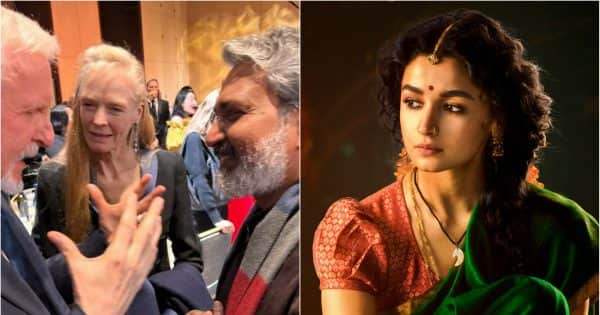 Celebs Reaction On RRR Wins Critic Choice Awards: Ram Charan, Jr. NTR and Alia Bhatt starrer film ‘RRR’ is making a lot of waves abroad. After winning the Golden Globe Awards for the song ‘Natu Natu’, ‘RRR’ has once again raised the name of India abroad. Actually SS Rajamouli’s film has also won the Critics Choice Awards. After winning this award, the happiness of the makers knows no bounds. Actress Alia Bhatt has expressed her happiness on winning the Critics’ Choice Award for ‘RRR’. He has shared a post on his Instagram story, in which he has written, “Uffff what a beautiful morning.”

Other than this Alia Bhatt Alia Bhatt has shared another picture in which SS Rajamouli is seen meeting James Cameron, director of the Hollywood blockbuster ‘Avatar’. Sharing this photo, Alia Bhatt wrote, “Only icons.” 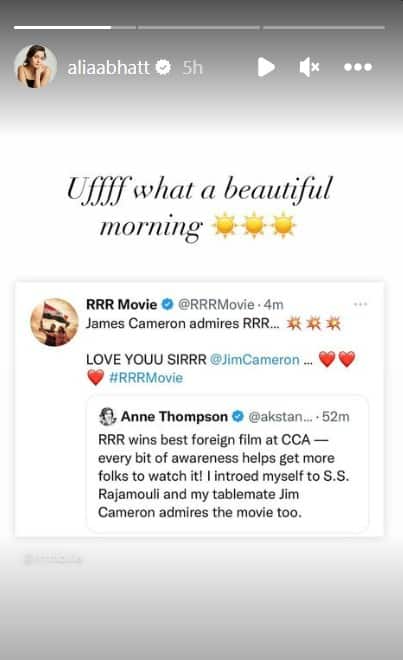 SS Rajamouli has also shared some of his pictures from the award night. In these photos, Rajamouli is seen with James Cameron. Posting pictures from the Critics’ Choice Awards night, the filmmaker tweeted, “The great James Cameron. RRR Saw it. He liked the film so much that he recommended it to his wife Suzy and watched the film again with her. Sir, I still can’t believe you spent 10 minutes with us analyzing our film. I am on top of the world at the moment… Thank you both.”

The great James Cameron watched RRR.. He liked it so much that he recommended to his wife Suzy and watched it again with her.????

Sir I still cannot believe you spent a whole 10 minutes with us analyzing our movie. As you said I AM ON TOP OF THE WORLD… Thank you both???? pic.twitter.com/0EvZeoVrVa

Let us tell you that this film starring Ram Charan, Jr. NTR, Ajay Devgan and Alia Bhatt has won this award in the Best Foreign Language Film category. Apart from this, the song ‘Natu-Natu’ from ‘RRR’ has also won the Critics’ Choice Awards 2023.