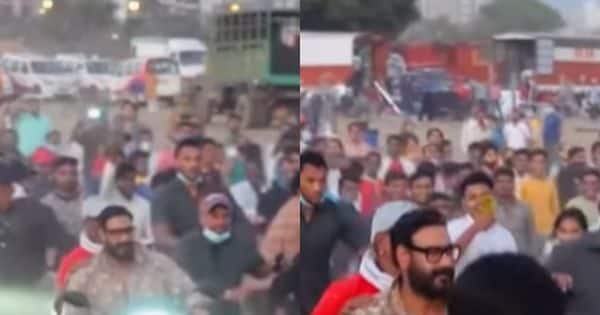 Ajay Devgn Video: Ajay Devgan has shared one of his videos on social media. In this video, the crowd is seen running behind him. Ajay Devgan has told why these people were running after him.

Bollywood actor Ajay Devgn These days he is enjoying the success of his film ‘Drishyam 2’. With this, he did his next film ‘Bhola’ Shooting has also started. Tabu is going to be seen once again with him in this film. This will be the ninth film of these two stars together. The teaser of Ajay Devgan’s film ‘Bhola’ has come out, which people are liking a lot. Meanwhile, he has shared a video on social media from the set of the film ‘Bhola’ which is attracting people’s attention. Ajay Devgan One may get scared after watching this video for the first time but will be satisfied after reading the caption. Let’s see what is it like in the video after all. Also Read – Drishyam 2: Ishita Dutta shares BTS PHOTOS from the sets of the film, the actress has fun with Shriya Saran

Ajay Devgn Has shared a video from his Instagram account on Saturday. In this video, he is carrying a man on a scooty and a large number of people are running behind him. Right there, his bodyguards are running with his scooty. At first glance, you will feel that Ajay Devgan is in trouble and you will be left wondering. However, there is nothing like this and Ajay Devgan has cleared everything in the caption of his post. Ajay Devgan wrote with this video, ‘It feels good when the crowd follows us for the right reason. Grateful to him. Ajay Devgan is not wearing a helmet while riding a scooty in the video. Regarding this, he has written, ‘You must wear a helmet, I have not worn it because I was a part of the shoot.’ Also Read – Drishyam 2 Box Office Collection Day 19: Ajay Devgan’s ‘Drishyam 2’ continues to earn big, earning crores even on weekdays