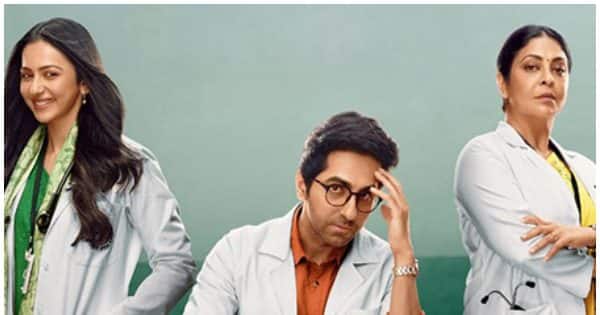 Doctor G Box Office Collection Day 1 Early Estimates: Ayushmann Khurrana’s film took a cautious step on the theaters on the first day. Due to which the film has earned a total of so many crores on the first day.

Doctor G Box Office Collection Day 1 Early Estimates: Bollywood superstar Ayushmann Khurrana and Rakul Preet Singh starrer director Anubhuti Kashyap’s film Doctor G has finally reached the theaters. The film was released on 14 October. One day has been completed for the film’s release and the figures of the film’s earnings are now coming to the fore. Ayushmann Khurrana starrer this film has taken a very careful step in the theaters on the first day. Due to which the film has been successful in getting a decent opening.

Ayushman Khurana Movies have a different audience. On social issues which are considered taboo subjects, Ayushmann Khurrana has mastered such subjects. They selectively present such films in front of the audience, which force the audience to consider. The interesting thing is that these films of his are presented in light-hearted comedy and funny style. Due to which the audience also comes out laughing and playing in theatres, understanding new things. doctor ji There is a similar film. In which actor Ayushmann Khurrana played the role of a gynecologist. The film performed as expected on the theaters and according to the latest report of Box Office India, the film has been able to earn around Rs 3.25 crore on the first day from theatres.

Chandigarh Kare Aashiqui’s earning is on the lines of Aashiqui

Please note that these figures are only estimates. There is still some time for the official earnings figures of the film to come out. However, according to the report of this early estimate, the film seems to be earning on the lines of his previous release, Chandigarh Kare Aashiqui. Ayushmann Khurrana and Vaani Kapoor starrer Chandigarh Kare Aashiqui had earned Rs 3.75 crore on the first day. This film also seems to be doing business in the same range.