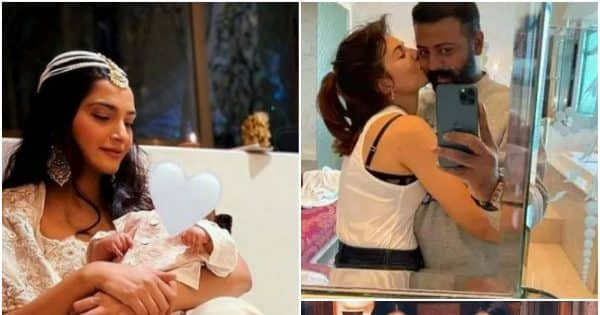 On October 26, many big news has grabbed attention from the entertainment world. On one hand, the teaser of Aayush Sharma’s upcoming film AS04 has been released. At the same time, actress Sonam Kapoor has shared some pictures of Diwali party with son Vayu, which are becoming very viral on social media.

Entertainment News Of The Day 26th October: On October 26, many interesting news has come out from the entertainment industry. Where on one side the teaser of Aayush Sharma’s upcoming film ‘AS04’ has been released on his 32nd birthday. On the other hand, actress Jhanvi Kapoor has made a big disclosure about her mother Sridevi. After Sukesh Chandrashekhar’s letter, Jacqueline Fernandez’s lawyer has issued his statement, demanding an impartial investigation of the case. On the other hand, Pakistani actor Feroz Khan’s wife has accused the actor of domestic violence. Here you will get to read 5 such news of today. Also Read – The Immortal Ashwatthama: Sara Ali Khan’s leaf cut from Vicky Kaushal’s film, this actress’s entry

On the occasion of 32nd birthday of Bollywood actor Aayush Sharma, the teaser of his upcoming film ‘AS04’ has been released. Aayush Sharma is seen in a tremendous style in the teaser of this action thriller film. Releasing the teaser of ‘AS04’, Aayush wrote in the caption, “Kuch action thriller toh bana hai on birthday. Aap sabka love is my identity.” Also Read – Today TV News 26 October 2022: Rajiv Sen killed Uturn on allegations of assault, Aamir Ali came out in support of Sajid Khan

Jhanvi has told in a recent interview that Sridevi had even given up non-veg food to get rid of Boney Kapoor’s cigarette addiction. In an interview to Pinkvilla, Janhvi said, “Then mother had become a vegetarian and said that I will not eat non-veg until you give up cigarettes. Then father used to plead in front of her.” However, after the death of the mother, the father gave up smoking cigarettes. Also Read – Seeing the new dress of Urfi Javed, the blood of the trolls boiled, this time the body was covered with the reel of the cassette

In the money laundering case, Sukesh Chandrashekhar recently wrote a letter from jail. In this letter, Sukesh had told that Jacqueline is innocent. Now Jacqueline’s lawyer has reacted to this statement of Sukesh. “Jacqueline is innocent, and will continue to fight for her dignity by following due process of law,” he added.

Actress Sonam Kapoor’s sister Riya has posted some pictures of Diwali celebrations from her Instagram account, in which Sonam is seen spending quality time with her son Vayu.

Pakistani actor Firoz Khan has been accused of domestic violence by his ex-wife Aliza Sultan. According to media reports, Aliza has presented evidence alleging harassment between 2020 and 2022. After this revelation of Alija, many Pakistani celebrities have come out in her support.