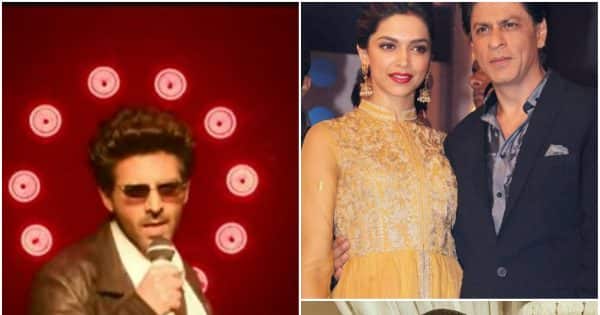 Entertainment News Of The Day: On November 11, many big news has grabbed attention from the entertainment industry. While the first song ‘Kala Jadu’ from Kartik Aaryan’s upcoming film ‘Freddie’ has been released, Shah Rukh Khan has congratulated the actress on Deepika Padukone completing 12 years in the industry.

Entertainment News Of The Day 11th November: Many interesting news has come out from the entertainment world on November 11. While Shah Rukh Khan has reacted on the completion of 15 years in Bollywood of actress Deepika Padukone, on the other hand, the first song ‘Kala Jadu’ from Karthik Aryan’s upcoming film ‘Freddie’ has been released. Actress Kangana Ranaut has given a controversial statement regarding Instagram. Actor Randeep Hooda’s series ‘CAT’ will premiere on Netflix on December 9. Here you will get to read 5 such news of today.

Shah Rukh Khan has congratulated the actress in a very special way on the completion of 15 years in Bollywood of actress Deepika Padukone. Shah Rukh Khan posted a photo from his film ‘Om Shanti Om’ on Twitter and wrote, “15 wonderful years of excellence, here watching you, watching and watching you.”

The first song ‘Kala Jadu’ from Kartik Aaryan’s upcoming film ‘Freddie’ has been released. This song is very much liked by the audience. Watch the video of ‘Black Magic’ here.

Actress Kangana Ranaut is once again embroiled in controversies. In fact, the actress shared a post on her Instagram story, in which she wrote, “Instagram is stupid, it is only about pictures. If any person has his own opinion, he disappears the next day.”

Randeep Hooda’s ‘CAT’ to release on this day

Actor Randeep Hooda’s upcoming series ‘CAT’ will premiere on Netflix on December 9. Randeep will be seen playing the role of Balwinder Singh Juneja in the film. Netflix itself has given this information through its Twitter handle.

We have the purerfect news for you! @RandeepHooda stars as Gurnam in CAT – a tale of brotherhood and espionage, releasing on 9th Dec only on Netflix!#CATOnNetflix pic.twitter.com/7hTNHuvNxf

CID team will be seen in ‘Drishyam 2’

The team of Sony TV’s famous show ‘CID’ will be seen in Ajay Devgan and Tabu’s film ‘Drishyam 2’. In the film, ACP Pradyum will investigate the case along with his team. After this news surfaced, the excitement of the fans about the film has doubled.