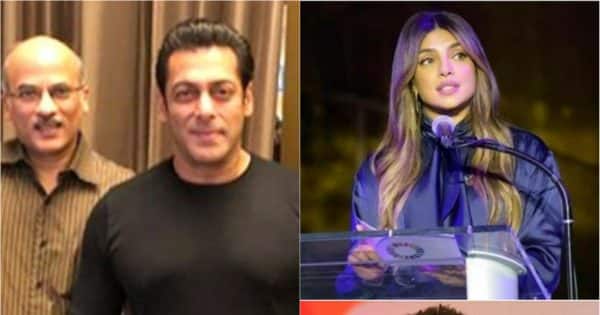 Entertainment News Of The Day: On October 18, many big news has grabbed attention from the entertainment world. On one hand, where Sooraj Barjatya has revealed that Salman Khan had expressed his desire to work in the film ‘Uchhai’. At the same time, actress Priyanka Chopra has expressed her concern about the condition of children in Kenya.

Entertainment News Of The Day 18th October: On October 18, many interesting news has come out from the entertainment industry. On one hand, after the trailer launch of ‘Uchai’, the director of the film Sooraj Barjatya has revealed that Salman Khan had expressed his desire to work in this film. At the same time, actress Priyanka Chopra has expressed her sympathy towards the children of Kenya by sharing a video. Raj Kundra, on the other hand, has recently revealed why he hides his face in public. Sanjay Dutt has reacted to the helicopter crash in Kedarnath. Here you will get to read 5 such news of today.

During the trailer launch of Amitabh Bachchan and Anupam Kher starrer ‘Uchai’, director Sooraj Barjatya revealed that Salman Khan wanted to work in this film. However, Sooraj refused to cast Salman in the film. Revealing this, he said, “Salman Khan had to say no, I broke all my bonds for this film.”

Actress Priyanka Chopra has recently shared a video, in which she has appealed to save the children dying due to hunger in Kenya. Priyanka said, “Children are dying of hunger. Money is needed to help them.” Along with this, Priyanka has appealed to the people to donate money.

Raj Kundra revealed why he hides his face

Shilpa Shetty’s Raj Kundra has recently revealed why he hides his face in public. Raj Kundra told that he does not hide his face from the public, rather he does not want to give his access to the media. There is no place to tell what he had to go through during the media trial.

Aamir Khan’s daughter Aira Khan has posted on boyfriend Nupur Shikre’s birthday. Aira Khan has shared the video of Nupur’s birthday celebration on her Instagram story. In this video, Aira is seen expressing love to Nupur.

Sending my deepest condolences to the families of the people who lost their lives in the helicopter crash today. ,

Sanjay Dutt reacted on the helicopter crash in Kedarnath