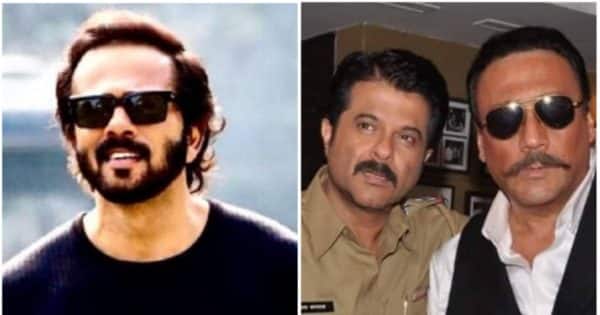 Top 5 Entertainment News today: Many big news has come out from the entertainment world, where a big update has come on Singham Again. On the other hand, the pairing of Anil Kapoor and Jackie Shroff is going to rock the big screen once again.

Today Entertainment News: Many big news has come out from the entertainment world. where on one side Rohit Shetty Has given information about the next part of Singham. Rohit revealed that he is very excited for this film as the script is very well made. The audience has also become very excited about this film. On the other hand, a news has come about Bollywood star Anil Kapoor and actor Jackie Shroff, in which it has been told that both are going to be seen together in a film. In this report of Bollywood Life, you will get to read 5 such news of today. Also Read – Starcast of ‘Circus’ had a lot of fun on the sets of Bigg Boss 16, Ranveer-Jacqueline’s look won hearts

Rohit Shetty has given information about the next part of Singham. Rohit revealed that he is very excited for this film. He said in an interview, ‘This film is larger than life. It has been made on a different level from Sooryavanshi and it is also 10 times bigger than Sooryavanshi. Please tell that Ajay Devgan did very good acting in Singham 1 and Singham 2. People liked these films a lot. Now the fans are eagerly waiting for its next part.

Anil Kapoor and Jackie Shroff will be seen in this film

Bollywood stars Anil Kapoor and Jackie Shroff have worked together in many films. In both of these films, the fans have given love openly. Now once again Anil Kapoor and Jackie Shroff are going to be seen together. According to Pinkvilla’s report, the pair of Ram Lakhan is going to make a splash once again in Subhash Ghai’s film Chor Police. The writer of this movie is Anees Bazmee. It will be a comedy film. Work on this film will start next year i.e. in the year 2023. Also Read – Deepika Padukone to play Lady Cop in Singham Again, Rohit Shetty confirms it!!

Bollywood actors Vicky and Katrina Kaif got married last year, whose pictures went viral on social media. Recently both of them celebrated their first wedding anniversary. Meanwhile, Vicky Kaushal has recalled the moment when he had given his heart to Katrina. He said in an event, that day was very special for me. It is the best chapter of my life. Apart from this, Vicky Kaushal has said many things about Katrina.

The fortunes of Tiger, son of Salman Khan’s bodyguard Shera, have brightened. A news has come about him. Actually, according to Pinkvilla’s report, Tiger is about to debut in films. Tiger is about to start his career with Satish Kaushik’s film. Salman Khan has talked to Satish Kaushik about Tiger’s debut. This film is currently being discussed. It will come on the floor by 2023. However, so far no official statement has come regarding this. Also Read – Cirkus Song OUT: Seeing Ranveer Singh, Deepika Padukone felt ‘Current Laga Re’, Circus song released

Bollywood’s stylish actress Sonam Kapoor has recently become a mother. These days she is giving all her time to her child. Sonam Kapoor is married to Anand Ahuja. Both often keep giving couple goals to their fans. Meanwhile, Sonam Kapoor has posted a post on her Instagram, in which she is describing her father Anil Kapoor as the perfect husband. Apart from this, Sonam Kapoor said that her mother had chosen Anand Ahuja for her.