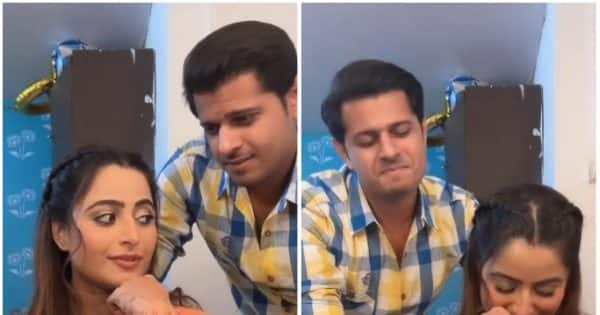 Aishwarya Sharma latest video with Neil Bhatt: Star Plus’ popular TV show ‘Ghum Hai Kisikey Pyaar Meiin’, Neil Bhatt and Aishwarya Sharma are once again in the headlines. Huh. The name of this show is at the second position in the TRP list of BARC released recently. The current track of the show is not much liked by the audience. Actually, these days Pakhi and Virat are getting closer and in such a situation, the fans of Ayesha Singh (Sai) are passing this thing exasperating. Meanwhile, Aishwarya Sharma has shared such a video on Instagram, seeing which people are seen taking out their anger on her.

TV actors Neil Bhatt and Aishwarya Sharma have recreated a popular scene from the film Anita on the sets of ‘Gum Hai Kisi Ke Pyaar Mein’. Both Manoj Kumar and Sadhana have tried to recreate the dialogues of Anita’s ‘How Much Pagal…Very Very Much Pagal’ in a funny way. Aishwarya Sharma shared this video on social media a few hours ago. The video has got 80 thousand likes so far. Both often share similar funny videos on social media. Well this time the trolls are once again seen taking out their anger on this TV couple. A user has commented on this video, ‘You both are bullshit.’ At the same time, another user says, ‘No need to tell you guys..both are crazy and we know.’

Big twist will come in the show

TV serial ‘missing someone’s love‘ There are going to be many twists back to back in the upcoming episode. Since the leap, it is being shown in this show that the distance between Sai and Virat has increased. In the coming days, Sai will reveal the real father’s name to her daughter Savi. In such a situation, it has to be seen that after this twist, where will the story of ‘Gum Hai Kisi Ke Pyaar Mein’ go?