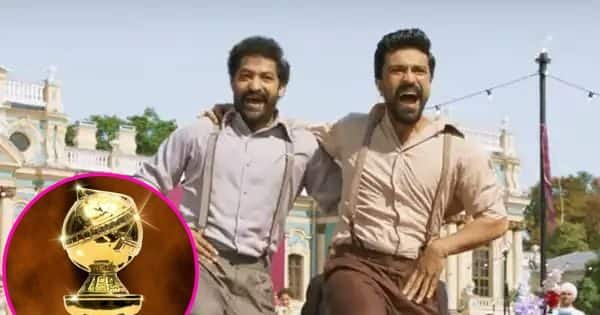 Golden Globe Awards 2023: Ramcharan and Junior NTR’s film RRR had not only shown fire at the box office in India, but this movie is now making waves in foreign countries as well. In fact, RRR (RRR) Natu Natu‘ (Natu Natu) for the song golden globe awards Has registered victory in the 80th edition of This song has got the title of Best Original Song. It is being told that as soon as ‘Naatu Naatu Naatu’ was declared the Best Original Song, jr ntr, SS Rajamouli And ramcharan Jumped up with happiness. ‘Naatu Naatu Naatu’ getting this award is also a matter of great pride for Indian cinema.

The Golden Globe Awards 2023 was held at the Beverly Hilton in Beverly Hills, California, which was attended by Hollywood celebrities as well as many Indians. While talking about ‘RRR’, the film was nominated in two categories, which include Non English Language and Best Original Song Motion Picture. At the same time, the song ‘Naatu Naatu’ of the film was a big hit in 2022 and was also included in the list of hit tracks.

The winner for Best Song – Motion Picture is @mmkeeravaani for their song “Naatu Naatu” featured in @rrrmovie, Congratulations! #GoldenGlobes pic.twitter.com/ePaXzJ1AoL


Natu NatuOn the victory of Natu Natu, none other than music director MM Keeravani, who composed the song, reached the stage to receive the award. Let us tell you that ‘Natu Natu’ was nominated for the Golden Globe Awards on December 12 last year itself.

RRR made it to the Oscars

RRR has earned more than Rs 1200 crore at the box office. The special thing is that the film has made its way to the Oscars. Apart from this, Rajamouli was also awarded the title of Best Director at the New York Critics Circle Awards for RRR. Please tell that apart from Junior NTR and Ramcharan, Alia Bhatt and Ajay Devgan also played important roles in the film.