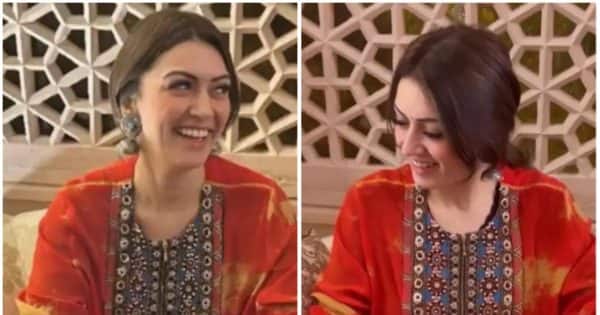 Hansika Motwani Mehendi pics: Some pictures of South actress Hansika Motwani are becoming increasingly viral on social media, in which she is seen applying mehndi in her beloved’s name.

Hansika Motwani: Actress who rocked from Bollywood to South Hansika Motwani (Hansika Motwani) is going to tie the knot soon. If reports are to be believed, Hansika Motwani will tie the knot with Sohail Kathuria on December 4 at Mundota Fort in Jaipur. Both have dated each other for a long time. According to the information, the marriage rituals of these two have started now. Meanwhile, some pictures of Hansika Motwani’s mehendi ceremony are becoming increasingly viral on social media, in which she is looking very cute. Fans are liking this style of Hansika very much. Also Read – Hansika Motwani married Sohail Khaturiya, this cute video is going viral

In these photos, Hansika is looking very beautiful in Sharara dress. With this, she has carried oxidized earrings. Seeing this look of the actress, the fans are happy. According to media reports, only Hansika’s family members and friends were present in this ceremony. Fans are showering love fiercely on these pictures of Hansika Motwani. While commenting fiercely on these photos, users are already seen congratulating the actress for her marriage. Recently, Hansika’s family had set up a Mata ki Chowki in Mumbai. According to media reports, Hansika has reached Jaipur with her family for marriage. A program of fellowship has been kept on December 3, after which the marriage will take place on December 4.

Hansika Motwani has worked in these films

Let’s tell that Hansika Motwani has spread acting in many films. He worked as a child artist in the TV serial Shaka Laka Boom Boom. Talking about Hansika Motwani’s upcoming film, she will soon be seen in Rowdy Baby. It is known that Hansika remains very active on social media. The actress often shares pictures and videos with her fans, which her fans like very much. Also Read – Hansika Motwani married Sohail Kathuria with pomp in Jaipur, the bridal look of the actress went viral