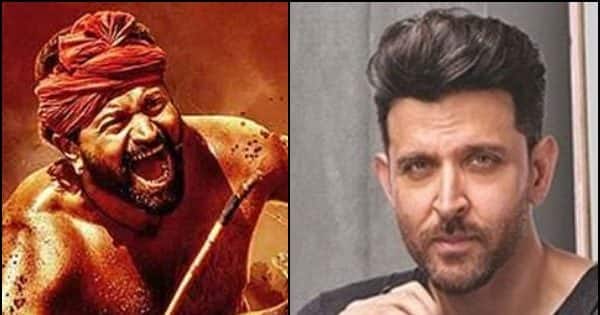 Hrithik Roshan Praise Kantara: south cinema filmKantara‘ rocked the box office. Rishabh Shetty The magic of this starrer hit the fans in such a way that everyone was seen praising ‘Kantara’. The name of ‘Kantara’ kept trending on social media for a long time. Not only this, many stars from Bollywood to South cinema praised Rishabh Shetty’s ‘Kantara’ fiercely. At the same time, another actor’s name has been added to the fan list of this film. handsome hunk of bollywood Hrithik Roshan Has also seen ‘Kantara’ and has praised the film on Twitter. He has also put his point on the climax of the film in his tweet. Also Read – SS Rajamouli was also shocked to see ‘Kantara’, said, ‘Be careful after this…’

Actually, Kantara was released on 30 September. In such a situation, it is clear that Hrithik Roshan has seen this film a bit late but finally he has seen this film and after watching the film, he could not live without praising it on social media. The actor wrote in his tweet, ‘Learned a lot by watching Kantara. The power of Rishabh Shetty’s conviction is what makes the film extraordinary. Excellent story, direction and acting. The peak climax and transformation gave me goosebumps. My respect and salute to the team. At the same time, Rishabh Shetty also replied to this tweet and wrote, ‘Thank you sir.’ Also Read – Top 5 South Gossips of the Week: Ram Charan’s entry in Pushpa 2, Akki’s film in Prithviraj’s hands !!

‘Kantara’ included in the big films of the year 2022

Rishabh Shetty has appeared as a lead actor in ‘Kantara’ and he has also directed this film. This film was made in a budget of only 16 crores, but in earning ‘Kantara’ has broken the records of big films. The film has so far earned around 400 crores, with which the film has become one of the top five big films of the year 2022. Also Read – These 10 low-budget films of South made huge money, made the makers rich

On the other hand, talking about Hrithik Roshan’s work front, the actor was last seen in the film ‘Vikram Vedha’, which gave fans a lot of hope. However, the film did not perform well at the box office. At the same time, now Hrithik will be seen opposite Deepika Padukone in the film ‘Fighter’.