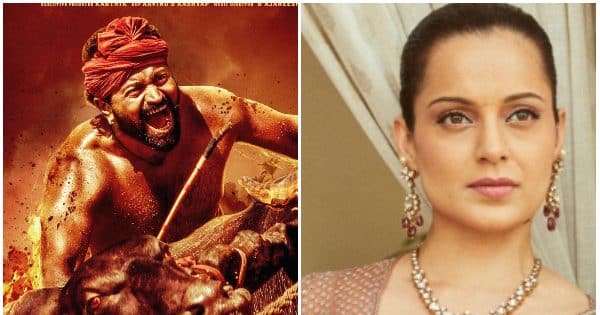 Kangana Ranaut praises Kantara: Kannada cinema’s film Kantara has reached theaters some time back. Reached Hindi Theaters without any promotion. On the basis of its tremendous content and new story, director and actor Rishab Shetty’s film Kantara has managed to impress the Hindi audience as well. The film has earned around Rs 15 crore in Hindi theaters in a short span of time. That too when along with this film, Ayushmann Khurrana and Rakul Preet starrer film Doctor Zee was standing on the theatres. The film has also been seen by many Bollywood stars. After which the film stars are praising this film fiercely by keeping their opinion on social media. Now the name of actress Kangana Ranaut has also been added to this list.

actress Kangana Ranaut Recently, on social media, Kannada star Rishabh Shetty starrer film Kantara has been highly praised. Praising the film, the actress wrote, ‘I just watched the film Kantara with my family. I’m still shaken. What an amazing experience. Rishab Shetty. hats off to you. Writing, directing, acting and action… all unbelievable. Actress Kangana Ranaut praised Rishabh Shetty and said, ‘What a wonderful mix of folklore, tradition and problems. What great photography, action and thriller. Cinema calls it. That’s why movies happen. The theatrical experience was unmatched.

Kangana Ranaut further said, ‘I don’t think I will ever be able to come out of this experience till next week. wow wow wow.’ Kangana Ranaut said these things through a video shared on InstaStory.

Kantara has earned so many crores at the worldwide level

Film star Rishabh Shetty’s film Kantara has not even completed 1 month of its release. The film was released in Kannada language on 30 September. After earning the tag of a hit here, the film was also released in Hindi and Telugu versions. Where this film reached Theaters on 14 October. After which the film has so far earned Rs 181 crore while earning a lot at the worldwide level.