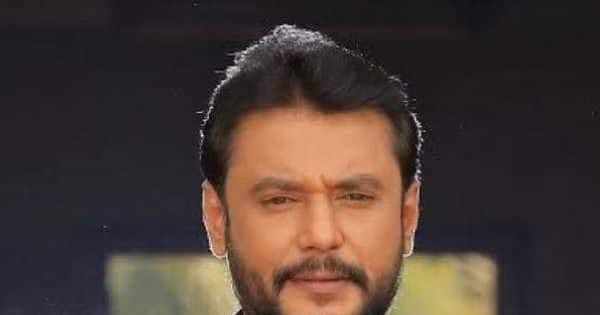 Darshan Video: kannada actor Darshan have suddenly come into the limelight. Actually, he had made objectionable remarks on the goddess of fortune. Since then, he was being fiercely opposed. People had said that Darshan’s comment shows his poor thinking towards women. Now Darshan had reached an event where he was protested and someone thrashed him by throwing slippers. The video of this incident was caught on camera and is becoming increasingly viral on social media. Let us know what is the whole matter and why did the matter escalate so much that Darshan was killed by throwing slippers.

Darshan had reached Karnataka to promote his film. An event was organized to launch the new song of his film. He reached the event and climbed the stage and during this a slipper was thrown on one side of him which hit Darshan on his shoulder. The people present on the spot were surprised to see this incident. The situation was brought under control immediately thereafter. While there is opposition to Darshan Kumar’s statement, some people have demanded the arrest of the person who slapped Darshan.

Darshan had said this in the interview

Significantly, Darshan had recently said during an interview, ‘The goddess of fortune does not knock at your door. If he knocks on the door, grab him and drag him to your bedroom. Take off all her clothes, if you give her clothes she will go out.’ When this video of Darshan went viral on social media, people got angry. People say that this thing is tolerable and strongly condemned it.