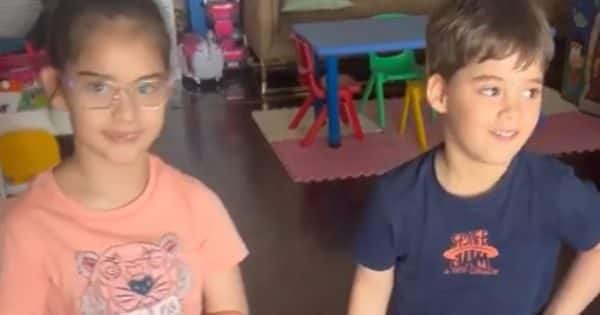 Karan Johar Kids Yash-Roohi Video: Karan Johar has shared a dance video of his kids Yash and Roohi on social media. People are very fond of this video of Karan Johar’s children.

Popular filmmaker of Bollywood industry Karan Johar These days he is in discussion about his upcoming film ‘Rocky and Rani Ki Prem Kahani’. He has recently announced the release date of this film. This film will be released in theaters next year 2023. Meanwhile, Karan Johar, who is active on social media, often shares funny videos of his children Yash and Roohi. These videos of his are also well liked. He has once again shared a video of his kids Yash and Roohi which is catching people’s attention. Let’s see what it is like in this video.

Karan Johar shared the video of his children

Karan Johar Has shared a video from his Instagram account on Sunday. In this video, his kids Yash and Roohi are dancing on him while singing the song ‘Disco Deewane’ from his film ‘Student Of The Year’. Karan Johar has written with this post, ‘This is the third version of Disco Deewane.’ He tagged Vishal Dadlani and Shekhar Ravjiani with it. Many celebrities have commented on this video of Karan Johar. Let us tell that the film ‘Student of the Year’, directed by Karan Johar, was released in the year 2012. The film marked the debut of Alia Bhatt, Sidharth Malhotra and Varun Dhawan. read this also: Jaya Bachchan narrated her experience on periods to her granddaughter Navya, said, ‘While shooting in the bushes…’