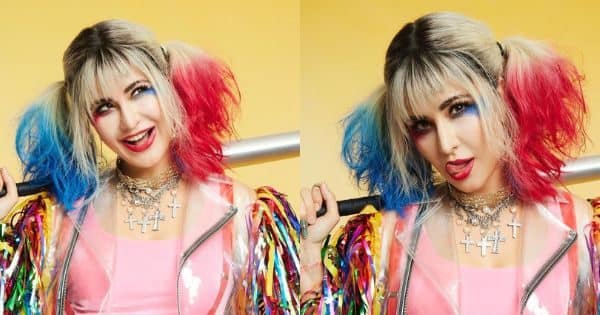 Bollywood actress Katrina Kaif has shared her pictures. She is seen in Halloween look in these pictures. Users are commenting fiercely on this look of Katrina Kaif.

Bollywood stars celebrate all the festivals with pomp and glimpses of it are visible on their social media accounts. Bollywood stars recently celebrated Halloween and shared its pictures with fans. The look of these stars has caught the attention of the people. now actress Katrina Kaif shared his photos. She is seen in Halloween look in these pictures. Users are commenting fiercely on this look of Katrina Kaif. Let’s have a look at the look of the actress…

Katrina Kaif Has shared three of his pictures on his Instagram account on Monday. In these pictures you can see that she has copied the look of Hurley Queen. Katrina Kaif is wearing a transparent jacket with a pink crop top with denim shorts in this look. At the same time, his hairstyle has caught the attention of the people. Actually, Katrina Kaif has made two peaks, one in blue and the other in red color. Along with this, her makeup is finding people scary.

Talking about Katrina Kaif’s work front, her film ‘Phone Bhoot’ is going to be released in theaters on November 4, 2022. Siddhant Chaturvedi and Ishaan Khattar are going to be seen with him in this film. Apart from this, Katrina Kaif will be seen working with Salman Khan and Emraan Hashmi in the film ‘Tiger 3’ and with Alia Bhatt and Priyanka Chopra in the film ‘Jee Le Zara’.