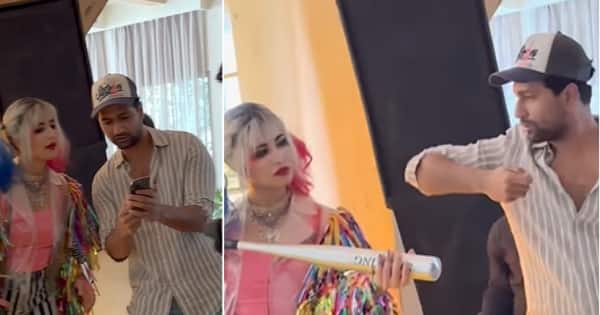 katrina kaif – Vicky Kaushal BTS Video: Bollywood actress Katrina Kaif is in the news these days for her film Phone Bhoot. Katrina had recently reached Salman Khan’s TV show Bigg Boss 16 to promote her film. There she was seen with Salman Khan. For information, let us tell you that at the time of marriage, she was seen onscreen with Salman Khan for the first time. Meanwhile, now a video of Katrina Kaif is becoming fiercely viral on social media. In which the actress is seen with her husband. After watching this video, the fans are praising the pair of these two very much.

bollywood star Vicky Kaushal and his wife Katrina Kaif A video of it is doing the rounds on social media. Vicky and Katrina are seen in a completely different style in this video. This video of Vicky Katrina is from before a photoshoot. In this video, Vicky Kaushal is seen telling Katrina Kaif to pose for photos. As you can see in this viral video, Katrina Kaif is seen in a Halloween look and her husband Vicky Kaushal is seen explaining to her the pose for the photo. Sharing this video, Katrina Kaif has also written a funny caption. She has written that when the husband becomes a director…. This video of Vicky and Kate is making a splash on social media.

Know when Katrina Kaif’s film will be released

Katrina Kaif is soon going to show her acting skills at the box office with the film Phone Bhoot. This film of Katrina will be released on the big screen on November 4. Apart from Katrina Kaif, Siddhant Chaturvedi and Ishaan Khattar are also going to be seen in this film.