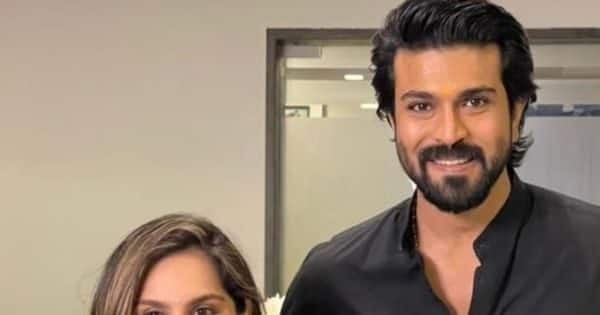 Popular star of South film industry Ram Charan This year his film ‘RRR’ created a lot of panic at the box office. Now Ram Charan has told through social media account that his wife Upasana Kamineni She is going to be the mother of the first child. In this way, the year 2022 has been very lucky for Ram Charan. Ram Charan and Upasana Kamineni are about to become parents after 10 years of marriage. At the same time, Chiranjeevi, father of Ram Charan and megastar of South Film Industry, has also shared this good news on his social media account. Also Read – South Gossips Today: This person told Ram Charan boring, RRR composer MM Keeravani’s mother passed away

ram charan Has shared a poster on his social media account. A picture of Lord Hanuman has been made on it and a message has been written. It is written in this message, ‘With the grace of Shri Hanuman ji, we are happy to share this information that Ram Charan and Upasana are ready to welcome their first child. With love and gratitude Surekha and Chiranjeevi Konidela, Shobhana and Anil Kamineni. At the same time, Ram Charan’s father Chiranjeevi has shared the same post on his social media account. Also Read – RRR: SS Rajamouli’s film nominated for Golden Globe Awards, these stars including Prabhas-Alia congratulated

Ram Charan and Upasana Kamineni married in the year 2012. It is said that both of them were together in college and later became good friends. Then Ram Charan and Upasana Kamineni got into a relationship and later got married. Talking about the work front, Ram Charan was last seen in the film ‘Acharya’ with his father Chiranjeevi. Now he will be seen in the film ‘RC15’ with Kiara Advani. Apart from this, Ram Charan will be seen doing a cameo in Salman Khan’s film ‘Kisi Ka Bhai Kisi Ki Jaan’. Also Read – Today Entertainment News: Income Tax raids at makers of ‘Pushpa’, complaint filed against Urfi Javed