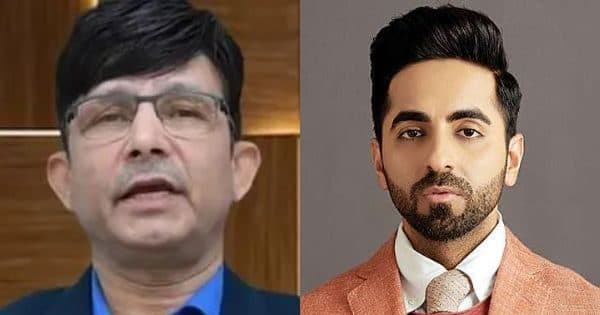 Kamal R Khan i.e. KRK He describes himself as a film critic and is seen reviewing films as well as stars. In his review, KRK reprimands films and stars fiercely. Now he is a Bollywood actor Ayushmann Khurrana has been targeted. Actually, KRK did Ayushmann Khurrana’s film. ‘An Action Hero’ After the release of the trailer, he has given his review. After watching the trailer, he has told its flop film and has said many more. Let us know what KRK has written in his tweet.

Kamal R Khan in his latest tweet Ayushman Khurana Aimed at. He wrote in the tweet, ‘I saw the trailer of the film ‘An Action Hero’ and it is pathetic. This is a complete waste of time and money from Bhushan Kumar’s flop films factory. This will be Ayushmann Khurrana’s fifth consecutive flop film. Four films ‘Doctor Ji’, ‘Anek’, ‘Chandigad Kare Aashiqui’ and ‘Gulabo Sitabo’ also flopped. Ayushmann Khurrana’s career is over.

I just watched #ActionHero trailer and it’s pathetic. It’s totally waste of time n money from the factory of flop films of Bhushan kumar. It will be the 5th disaster of @ayushmannk in a row. Other 4 are #DoctorG #Anek #ChandigarhKA and #GulaboSitabo,
Ayushmann career is finished.

KRK has also been jailed for his tweets. Actually, KRK was arrested from Mumbai International Airport on August 30 by Mumbai Police in connection with the old tweet due to his old objectionable tweet. However, now he is out on bail and has started tweeting.