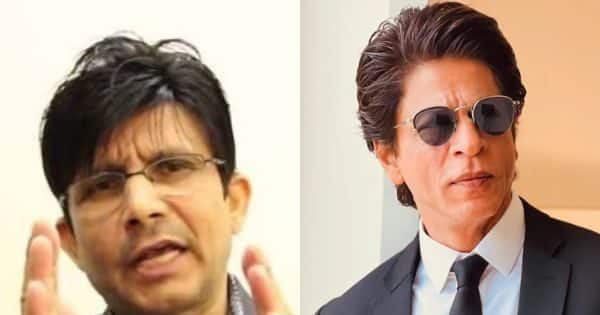 KRK has targeted Shah Rukh Khan and has given his opinion about his last few films and upcoming films. KRK has tweeted back-to-back about Shahrukh Khan.

Kamal R Khan i.e. KRK On his Twitter handle, he keeps targeting some Bollywood film and Bollywood stars every day. KRK fiercely criticizes films and stars without any hesitation. Now he is a Bollywood superstar Shah Rukh Khan There have been many tweets back-to-back regarding this. KRK has targeted Shah Rukh Khan and has given his opinion about his last few films and upcoming films. Let us know what KRK has to say about Shahrukh Khan.

Kamal R Khan wrote on his Twitter handle,Shahrukh Khan Every film of is a blockbuster on Twitter and Mannat. But Shah Rukh Khan must understand that 130 crore Indians neither use Twitter nor go to Mannat nor are interested in watching films of actors above 50, especially the Khans. So he has very little option left to make a hit film.

SRK’s each film is a blockbuster on #twitter and #mannat, But SRK must understand that 130Cr Indians don’t use Twitter neither go to Mannat nor interested to watch films of 50+ age actors especially Khans. Therefore he has left with very less options to make a film HIT.

KRK wrote in another tweet, ‘Shahrukh Khan has given 7 films in the last 9 years. These include Happy New Year, Dilwale, Fan, Raees, Jab Harry Met Sejal, Zero, Dear Zindagi. And his three films Pathan, Dunki and Jawan are ready for release soon. Hope these films do well.

SRK has given 7flops during last 9 years. #HappyNewYear#dilwale#Fan#Raees#JHMS#Zero,#DearZindagi

And his 3films #pathaan #dunki and #jawaan are going to release soon! Let us hope for the best.

KRK has been arrested

Let us tell you that KRK has been in trouble due to his tweet. Actually, KRK was arrested by the Mumbai Police on August 30 from the Mumbai International Airport in connection with the old tweet. However, he was released after a few days in jail. After coming out of jail, KRK again started targeting the Bollywood industry by tweeting.