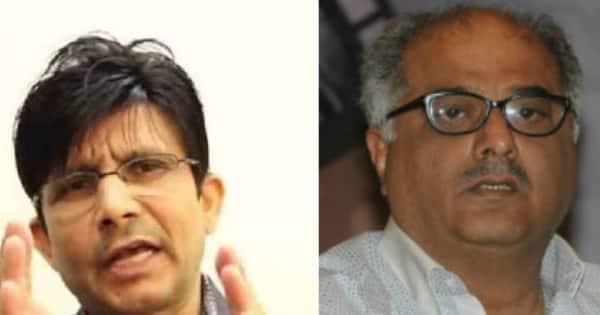 KRK on Boney Kapoor: Actor KRK remains in a lot of discussion about his tweets. He often keeps tweeting Bollywood films about his stars with his Twitter handle. Recently, he wrote a lot about Katrina Kaif’s film Phone Bhoot. Before this, he has praised South’s film Kantara fiercely on social media. But this time KRK has done something that is being discussed a lot. KRK has made a tweet about filmmaker Boney Kapoor. In which he is seen taunting Bollywood as well as Boney Kapoor.

KRK wrote this about Boney Kapoor

filmmaker Boney Kapoor These days, there is a lot of discussion about his film ‘Mili’. This film of his has not been able to show much at the box office. Recently, Boney Kapoor had targeted Akshay Kumar without naming him. And said that some actors ‘ finish shooting in 25-30 days and get their fees full.’ Now about this tweet of Boney Kapoor KRK has given its reaction. In the first tweet, he quoted Boney Kapoor’s point. First told about his flop films and said about Boney Kapoor, ‘Does this mean you are also dishonest?’ After this, in the second tweet, KRK wrote – What you are saying about Boney Kapoor is true. So let’s now see both KRK’s tweets, about which there is a lot of discussion.

Boney kapoor said, Bollywood ppl can’t make good films, if they are not honest. And unfortunately today most of actors, directors are dishonest.
Even though I do agree with him but my question- Boney Ji your last 3films #Tevar #MOM #mili are flop, means you are also dishonest?

Whatever Boney kapoor said about Bollywood that is truth and he is one of them. Studios have made all film makers dishonest. Today everyone is busy in looting studios in the name of film making. All the staff members of all studios are dishonest with 0% knowledge about films.

These three films of Boney Kapoor were flops

Boney Kapoor’s recently released film ‘Mili’ could not earn much at the box office. Boney Kapoor’s daughter Jhanvi Kapoor was seen in this film. Apart from this, Boney Kapoor’s film Tevar and Mom was also a flop.