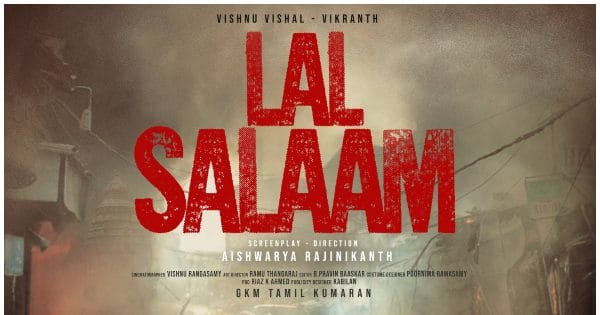 Rajinikanth in Lal Salaam: Tamil superstar Rajinikanth’s upcoming film Lal Salaam has been announced. His daughter Aishwarya Rajinikanth is making this film. Along with this, two Dhansu stars are also going to be seen in the film.

The interesting thing is that this film is going to be made a big production banner of Tamil film industry. Rajinikanth Production company Lyca, which has produced films like Robot and 2.0, will produce it. Along with this mega announcement, the makers have released the announcement poster of the film. In which a cricket helmet is shown burning in the middle of a scorched city in the event of a riot. You can see this announcement poster of the film here.

Will Lal Salaam release in Hindi too?

The answer to this question has not been found at this time. The announcement poster of the film has also been released only in Tamil and English languages. These days South films are also wooing Hindi speaking audience. Superstar Rajinikanth’s fan following is already tremendous in the Hindi market. Rajinikanth usually avoids cameo characters. But for his daughter Aishwarya Rajinikanth, the actor has also agreed to do this small role in the film. Now it will be interesting to see if the makers are trying to release this film in Hindi in future as well. You can tell us your opinion by commenting.