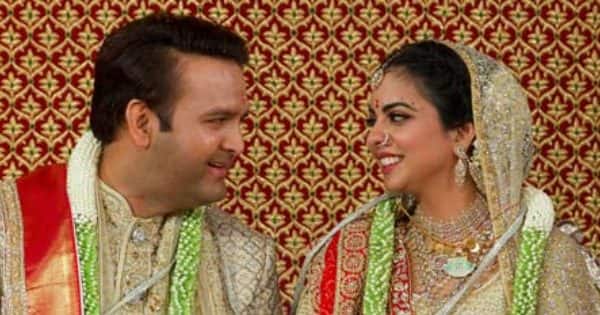 Isha Ambani Gave Birth To Twins: Isha Ambani, daughter of businessman Mukesh Ambani, has become a mother, she gave birth to twins on 19 November. Know here that Isha has named her children.

Happiness has knocked at the house of Asia’s richest industrialist Mukesh Ambani. Mukesh Ambani and Nita Ambani have now become grandparents. His daughter Isha Ambani has given birth to twins. According to reports, Isha gave birth to a son and a daughter on November 19. Let us tell that Isha was married in the year 2018 to Anand Piramal, son of businessman Ajay Piramal. After four years of marriage, now Isha has become a mother, Mukesh Ambani and Nita Ambani are not happy with this. Also Read – Before Vicky Kaushal-Katrina Kaif, these stars also visited the palaces of Rajasthan, see the complete list here

entertainment newsEntertainment NewsAccording to reports, Isha Ambani has named her son Aadiya while her son has been named Krishna. A statement shared by the Ambani family said, “We are happy to inform that our children Isha and Anand have been blessed with twins on 19 November 2022. Isha and the children (son Krishna and daughter Aadiya ) Well done. We seek your blessings and best wishes for Aadiya, Krishna, Isha and Anand in this most important phase of their lives.” Also Read – Not only Niharika Konidela, these celebs also followed the family tradition in marriage, some wore mother’s jewelery and some mother-in-law’s

Let us inform that earlier in the year 2020, Mukesh Ambani’s son Akash became father. Daughter-in-law Shloka Ambani gave birth to a son. Mukesh had expressed his happiness on becoming a grandfather.

Isha took over her father’s business at the age of only 23.

Please tell that at the age of just 23, Isha Ambani started helping her father in business. Isha Ambani worked hard to bring Reliance Jio to the top, after which the father gave her a place on the board of Reliance. Also Read – Preparations for the wedding of Akash Ambani and Shloka Mehta started with music, Falguni Pathak added to her voice