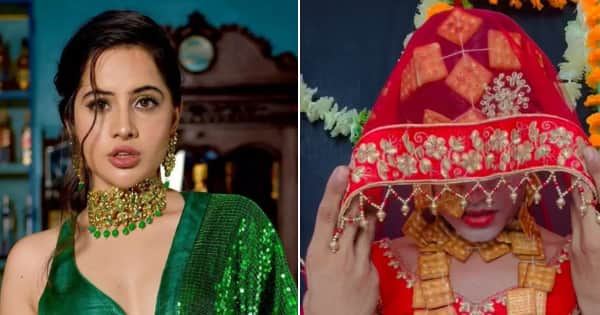 Urfi Javed Share Funny Look: Urfi Javed has recently shared a video from his Instagram handle and after seeing this look, he was very disappointed and he spoke this thing.

Urfi Javed Reaction on Weird Look: Urfi Javed, who is seen in Bigg Boss OTT, remains in a lot of discussion on social media. She is seen among the people with a new look every day. Recently, Urfi Javed shared a video, in which she was seen in a backless dress. This video of him became fiercely viral on social media and trolls took his class. Now in the meantime, Urfi Javed has shared a video on his Instagram story and has spoken about a new look. After watching this video you may also be surprised.

Urfi Javed was shocked after seeing this look

urfi javed She is often seen surprising people with her new looks. She is sometimes seen wearing a dress made of glass, and sometimes a dress made of photos, after which her social media is also trolled fiercely. But there is one look that has surprised even Urfi Javde. Urfi Javed has just recently shared a story with his Instagram handle. A boy is seen in this, who is seen wearing a maang tika and necklace made of biscuits. After seeing this look, Urfi Javed said, How did I not get this idea!. After seeing this Instagram story of Urfi Javed, speculations are being made that she too can do something like this soon.

Urfi Javed is seen in a strange dress

So far, Urfi Javed has been seen in a very strange dress. Sometimes she sticks flowers on her body, sometimes she comes in front of people by applying silver bark. For information, let us tell you that Urfi Javed Big Boss OTT I have also seen. What is your opinion about Urfi Javed’s new looks, do let us know by commenting.