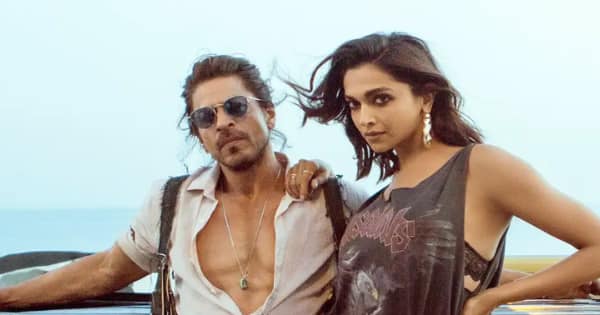 Shahrukh-Deepika Look Jhoome Jo Pathaan: The poster of the second song of Shah Rukh Khan and Deepika Padukone’s film Pathan has been released. The bold avatar of King Khan and Deepika is seen in this poster.

Shahrukh Khan Look From Jhoom Jo Pathan: Bollywood superstar Shah Rukh Khan is in limelight these days for his film ‘Pathan’. Recently, the film’s song ‘Besharam Rang Song’ was released. In which people were enraged after seeing the dress of actress Deepika Padukone. Since then, demands are being made to boycott the film on social media. Meanwhile, now the poster of the second song of Shah Rukh Khan’s film has come out. Which has been covered on social media as soon as it comes. Also Read – Sherlyn Chopra raged on the makers of Shah Rukh starrer Pathan, expressed displeasure over this

bollywood actor shahrukh khan and deepika padukone film Pathan There is a lot of discussion these days. There has been a debate on social media regarding this film. Meanwhile, now the poster of the second song ‘Jhoom Jo Pathan’ from the film Pathan has come out. Shah Rukh Khan and Deepika Padukone are seen together in this poster. While Shah Rukh Khan is seen standing with his shirt unbuttoned, Deepika Padukone is seen flaunting her toned legs in a short dress. Fans are very fond of this poster of the song of the film and are also sharing this poster fiercely on social media. Also Read – Before Pathaan, there was a controversy over these films of Shahrukh Khan, there was a ruckus on the intimate scene with this actress of King Khan

when will the song release

This song of Shah Rukh Khan’s film Pathan is going to release after two days i.e. on 22 December 2022. After seeing the poster of this song, now the fans are waiting for the release of the second song ‘Jhoom Jo Pathan’. Now it has to be seen whether there will be any controversy on social media even after the release of this song. For information, let us tell you that this film of Shah Rukh Khan is going to be released on the big screen in the year 25 January 2023. Also Read – Besharam Rang Controversy: Shah Rukh Khan’s ‘Pathan’ will not release in Bihar, BJP leader threatens