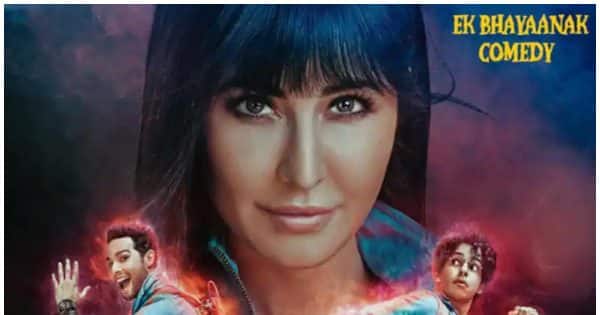 Phone Bhoot Movie Twitter Review: Bollywood film stars Katrina Kaif, Ishaan Khatter and Siddhant Chaturvedi’s film Phone Bhoot has finally reached the theaters. The film seems to be getting tremendous response from the audience. Even amidst the clash of three films together, Katrina Kaif and Siddhant, Ishaan’s film has managed to grab the attention of the audience. After watching the film, now the reviews of the audience have also started coming out. Viewers on social media handle Twitter have started commenting fiercely after watching Katrina-Siddhant and Ishaan’s film. Which shows that the audience has liked the trio of these three stars.

After marrying Vicky Kaushal, Katrina Kaif’s film Phonebhoot, which reached the theaters for the first time, has been given full marks by the audience. An internet user commented and wrote, ‘The first part of Phonebhoot is completed and the audience is in full swing with laughter. This movie is crazy and full of madness. References from Pop Cult… Katrina’s Slice Aid references and many more such moments that are making everyone go crazy. The audience has gone crazy at the interval. While an internet user commented on not seeing a single bad review and wrote, ‘There is not a single negative review. From critics to audience…everyone is liking it. I am very happy.’ You can see these comments of people here.

Finished watching #phoneBhoot and i want to truly credit the makers for offering something we haven’t seen before. I went will low expectations but I came out with a huge wide smile. I think it achieved more than it promised. It entangles at places but the overall serves.??

I am thoroughly loving the fact that audience are applauding the actress #KatrinaKaif, Her aura and presence is such that she can glue you to the screen along with her great dancing skills. ? #phoneBhoot #PhoneBhootReview

Katrina Kaif, Ishaan Khattar and Siddhant chaturvedi are set to take you on an entertaining rollercoaster in their horror-comedy Phone Bhoot! Watch #phoneBhoot NOW PLAYING on the big screen at #NovoCinemas, Get your tickets now at https://t.co/csayrM7NsI or the Novo App. pic.twitter.com/NOxjfLDxzm

Katrina Kaif’s #phoneBhoot movie can be hits the theaters. The only thing that. We know what will
happen..#PhoneBhootReview pic.twitter.com/pZjQ4eXVKL

NOT A SINGLE BAD REVIEW OH MY GOD. FROM CRITICS TO AUDIENCE, ALL ARE PRAISING IT. SOOOOOO HAPPY ?#phoneBhoot

Bollywood stars Katrina Kaif and Siddhant Chaturvedi and Ishaan Khatter starrer Phonbhoot is a classic horror comedy film. After Bhool Bhulaiyaa 2, this genre’s second film has reached theaters. Kartik Aaryan starrer film Bhool Bhulaiyaa 2 was well received by the audience. Earlier the film Stree was also a superhit film of this genre. Now the Bollywood film industry has started working in the horror-comedy genre. In this episode, this film has reached among the audience.