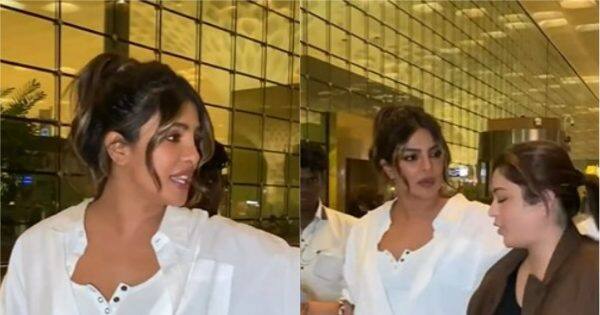 Priyanka Chopra In Delhi: Bollywood’s Desi Girl Priyanka Chopra has now become a well-known face in Hollywood as well. Priyanka has returned to India after 3 years, Priyanka’s excitement about returning to the country is being seen. After rocking Mumbai for 3 days, now Priyanka Chopra has reached Delhi. Recently, a video of the actress is becoming increasingly viral on the internet, in which Priyanka is seen at the Delhi airport. In this video, Priyanka is seen in a white shirt and black pants, in which she is looking very beautiful. At the same time, the actress has kept her hair open, which is quite fun on her.

It can be seen in the video that Priyanka Chopra She is seen giving autograph to a fan. Priyanka’s style is very much liked in the video. People are commenting a lot on this video of the actress and giving their feedback. One user wrote, “I love Priyanka’s hair from the beginning.” While another wrote, “Priyanka looks very beautiful.”

Talking about Priyanka Chopra’s upcoming projects, the actress will soon be seen in the film ‘Jee Le Zara’ with Katrina Kaif and Alia Bhatt. Farhan Akhtar will direct this woman centric film. The film will be based on the story of three friends. The film is being produced by Farhan Akhtar, Zoya Akhtar and Ritesh Sidhwani. Entertainment News (Entertainment NewsAccording to reports, apart from ‘Jee Le Zara’, Priyanka Chopra will be seen in another film ‘Love Again’. The film will release on May 12 next year.