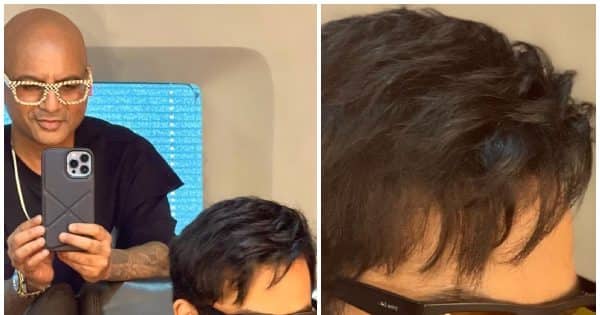 RRR star Jr NTR news look goes viral: South superstar Jr NTR gained worldwide popularity with the film RRR. After this, the film stars have announced their two big films. However, one of these films is yet to go on floors. Tollywood superstar Jr NTR had made a mega announcement of his film NTR 30 with director Koratala Siva and film NTR 31 with KGF director Prashant Neel. Fans are very curious about both these films. Surprisingly, even after 10 months of the release of the film RRR, both these films could not reach the floor. Now a picture of the film star has started going viral on social media. In which Jr NTR is seen in a completely different look. After seeing this picture, there has been a panic among the fans of Junior NTR.

This picture that went viral has been shared by famous hairdresser Aalim Hakim on social media. Sharing this picture, Alim Hakin wrote, ‘Man of Masses… a new vibe… a new style’ as soon as this picture surfaced on social media. entertainment news (Entertainment News) There was uproar in the world. Junior NTR After seeing this picture of, many internet users have compared him with Prabhas. One internet user commented and said, ‘It looks like Prabhas.’ While one user wrote, ‘If the barber has power, then NTR becomes Prabhas.’ See photos here.

So did NTR 30 reach the floor?

This look of Junior NTR has created panic among the fans. At the same time, people have started speculating whether NTR 30 is going to reach the floor soon. Let us tell you that director Koratala Siva is facing financial crisis after the film Acharya flopped badly. For this reason, his next film with Jr NTR has not started. Now after seeing this new look of the actor, people are speculating that this look is only for the shooting of NTR 30.