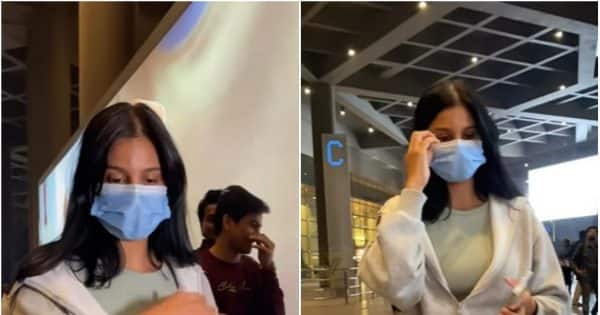 Suhana Khan Spotted At Airport: A video of Suhana Khan is becoming increasingly viral on the Internet. In this video, seeing Suhana at the airport, some boys following her start feeling shy.

Shah Rukh Khan’s darling Suhana Khan remains at the forefront of the discussion of StarKids. Suhana Khan is soon going to step into the acting world through Zoya Akhtar’s film ‘The Archies’. Photos and videos of Suhana often go viral. Recently Starkid was spotted at Mumbai airport, from where one of her videos is becoming increasingly viral on the internet. In this video, Suhana is seen wearing a gray colored jacket, along with she is also wearing a mask. Although it can be seen in the video that some boys running behind Suhana Shahrukh Seeing the daughter, they start laughing and joking. Also Read – These stars took a break from Bollywood as soon as the films flopped, Aamir Khan’s name added to the list

can be seen in the video suhana khan (Suhana Khan) is walking in the front while some boys are laughing and joking from behind. While Suhana looks back and sees that he gets shy. People are commenting a lot on this video of Suhana Khan, although some people are not liking the behavior of boys after seeing Starkid. Also read: Freddy New Poster: Alaya F dominated the hearts and minds of Karthik Aryan, shared Freddy’s poster and said- ‘My passion…’ Also Read – Shah Rukh Khan’s ‘Babuji’ passes away, ‘Circus’ star Sunil Shende no more

People are giving different reactions on this video of Suhana Khan. Commenting on the action of the boys, a user wrote, “Why should the boys in the back be shy.” So there another user wrote, “Look back.” One user was enraged at this act of the boys and commented, “What kind of behavior are these boys? A celeb’s daughter is being treated like this at the airport despite so much security. In such a situation, we How can one expect the safety of women and girls on the streets, who are not from big families?” Also Read – These Bollywood stars were stopped by the authorities at the airport, this actor was detained because of his color