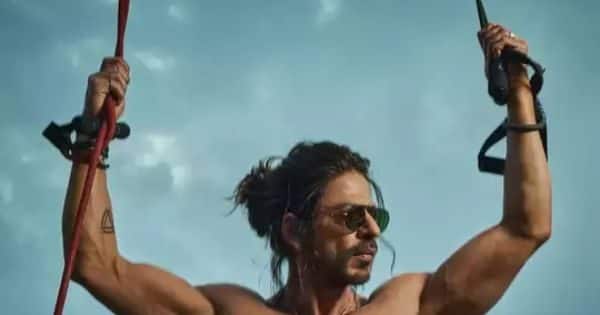 Shah Rukh Khan Pathaan Sequel: Shah Rukh Khan had reached among his fans on the occasion of his birthday and he cut the cake with the fans and celebrated the birthday. On this occasion, Shahrukh Khan hinted at the sequel of the film ‘Pathan’.

bollywood superstar Shah Rukh Khan Has celebrated its 57th birthday on 2nd November. On this special occasion, from mango to special people have wished their favorite star a birthday. At the same time, Shahrukh Khan also told that he does not do the same on the hearts of his fans. Actually, Shahrukh Khan has first greeted the fans who came outside his bungalow. After this, he reached a special fan event in Mumbai and cut a cake between them and thanked his fans. This style of Shahrukh Khan makes him King Khan. Shahrukh Khan said a big thing on this special occasion. Let us know what he has to say.

Shahrukh Khan gave a statement on the sequel of ‘Pathan’

Shahrukh Khan On the occasion of his birthday, he had reached among his fans and he interacted with them. He cut the cake with the fans and celebrated the birthday. On this occasion, Shahrukh Khan told the fans, ‘You guys pray that Pathan’s sequel comes. I hope you all like the film. We have worked hard for the film. Deepika Padukone, John Abraham and Aditya Chopra have all worked hard. I hope and you also pray that people like the film and then another party also comes. So that we can work on the sequel as soon as possible. In this way Shahrukh Khan has spoken openly about the sequel of his upcoming film ‘Pathan’. Although discussions were going on for a long time regarding the sequel of his film, but now after the statement of Shahrukh Khan, the possibilities of the film becoming a sequel have increased.

entertainment industry (Entertainment NewsThis big news has come out from the front. Shah Rukh Khan’s film ‘Pathan’ is scheduled to release in theaters on January 25, 2023. The teaser of the film ‘Pathan’ was released on 2 November on the occasion of Shahrukh Khan’s birthday. Directed by Siddharth Anand, the film also stars Deepika Padukone and John Abraham. Apart from this film, Shahrukh Khan will be seen working in the film ‘Jawan’ and the film ‘Dunky’.