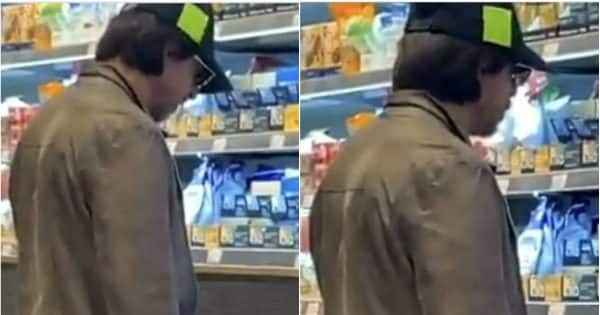 Shah Rukh Khan In Saudi Arabia Jeddah: Shahrukh Khan has reached Jeddah for the shooting of his upcoming film ‘Dunky’, from where his photos and videos are becoming fiercely viral on social media.

Bollywood actor Shah Rukh Khan in his upcoming film ‘Dunky (Dunki)’ has reached the city of Jeddah, Saudi Arabia. Fans were very excited to see their favorite actor abroad as well and hundreds of people turned up on the sets of ‘Dunky’ to catch a glimpse of King Khan. Some photos and videos of Shah Rukh Khan from the sets of ‘Dunky’ are going viral on the internet. People are reacting fiercely to these pictures of Shahrukh Khan. Also Read – Shah Rukh Khan changed the name plate of ‘Mannat’ so many times, till now King Khan has spent lakhs of rupees

Shahrukh Khan A fan of Shah Rukh Khan Films wrote on Twitter, “Shah Rukh Khan’s film Danki shooting location Jeddah had huge security, taking pictures and videos is not allowed at all. This film is going to be huge, because Everything looks very fresh. All the best Shah Rukh Khan.” Also Read – These Bollywood stars created a ruckus under the influence of alcohol, Salman Khan raised his hand on this actor

Heavy security at Shah Rukh Khan’s shooting location in Jeddah for #Dunky Taking pictures and videos are not allowed as per the current scenario. The movie is going to be massive, everything looks fresh?

All the best @iamsrk #ShahRukhKhan? pic.twitter.com/hDnRAn83KQ

Surprised the fans in the super market

Shah Rukh Khan gave a big surprise to the fans by reaching the supermarket of Jeddah, whose video is going viral on social media. Fans were very excited to see Shahrukh buying goods. Sharing Shahrukh’s video, a user wrote, “Shah Rukh Khan’s latest video from a supermarket in Jeddah, Saudi Arabia.” It can be seen in this video that King Khan is seen in brown colored shirt and black pants. The actor has put a cap on his head and glasses on his eyes. In the video, the Badshah of Bollywood is seen shopping in the super market. Also Read – Entertainment News Of The Day: Amitabh sends notice to Pan Masala Company, changed name plate of Shahrukh’s bungalow Mannat

Let us tell you that Shah Rukh Khan’s three films will be released in the year 2023, the first of which is ‘Pathan’. The Shah Rukh Khan and Deepika Padukone starrer film will release on January 25 next year. Directed by Siddharth Anand, the film is produced by Aditya Chopra. After Pathan, Shah Rukh Khan’s film ‘Jawan’ will create panic at the box office. The film will hit the theaters in June and finally Shahrukh’s third film ‘Danki’ will be released on the big screen. There is a lot of excitement among the fans about these three films.