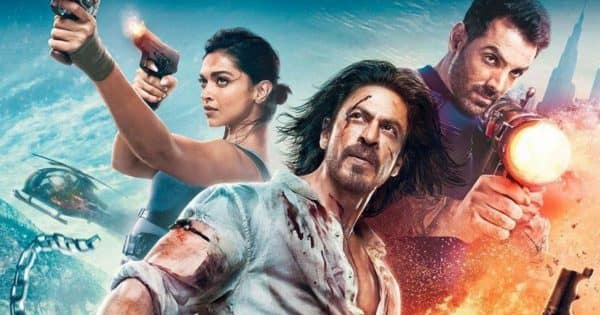 Shah Rukh Khan Fans Book Theater For Pathaan: Not much time is left for the release of Shahrukh Khan’s film ‘Pathan’. In such a situation, the desperation of the fans is also increasing. Not only this, fans have booked an entire theater in Mumbai to watch the first day first show.

Shah Rukh Khan Fans Book Theater For Pathan: Bollywood’s famous actor Shah Rukh Khan will soon be seen in the film ‘Pathan’ along with Deepika Padukone and actor John Ibrahim. His film is coming after almost four years, in such a way Shahrukh Khan (Shah Rukh Khan) fans are also very desperate for ‘Pathan’. The surprising thing is that the fans have booked the entire theater to watch the first day first show of ‘Pathan’. This has been confirmed by the theater owner Manoj Desai himself. He told that the fans of Shahrukh Khan have booked the entire theatre. Also Read – Shah Rukh took a big decision for the promotion of Pathaan, King Khan adopted a special trick to make the film a hit!

Shahrukh Khan (Shah Rukh Khan) fans have booked Mumbai’s Gaiety Galaxy Theater for ‘Pathan’ at 9 am. Although every time the first show in the film used to start at 12 o’clock, but for the sake of Shah Rukh Khan’s film, people also changed their plans. Talking about this, Manoj Desai, executive director of G7 Multiplex and Maratha Mandir Cinema, said, “It is true that Shah Rukh Khan’s fans have booked the entire theatre. Exhibitors demanded early screening on Friday.” But when the first show will start, it will be known only on Friday. However, it is learned that the first show has been booked by the fan club.” Also Read – Shah Rukh Khan reacted like this when Vijay Sethupathi said sorry, the actor himself told the old story

‘Pathan’ star will not give interview to media

Shahrukh Khan’sPathan‘ A news is also coming that even before the release, the makers have saved crores of rupees. Actually, the makers have made a marketing strategy regarding ‘Pathan’, in which it has been said that no ‘Pathan’ star will give interviews to the media. Makers believe that if they don’t say anything then there will be no ruckus. Also Read – Pathaan: Shahrukh Khan’s reply on ‘Shameless Rang’ stopped the trolls, King Khan said this about Deepika

‘Pathan’ will not be promoted

Trade experts believe that ‘Pathan’ has created a lot of buzz even before its release. While people from one side are questioning the color of the bikini, some people have liked the trailer very much. Not only this, the advance booking of ‘Pathan’ is also going on in a robust manner. Regarding these things, the trade analyst says that the star does not need the promotion of ‘Pathan’. Because if the stars give interviews then they will be questioned on the controversies related to ‘Pathan’ which can have a bad effect on the film.

One of the reasons for not promoting ‘Pathan’ is that it will save crores of rupees for the makers, which they can invest in other projects.

Anupama 19 January Episode: Someone else will enter Kavya’s life, Maya will keep an eye on Anupama-Anuj