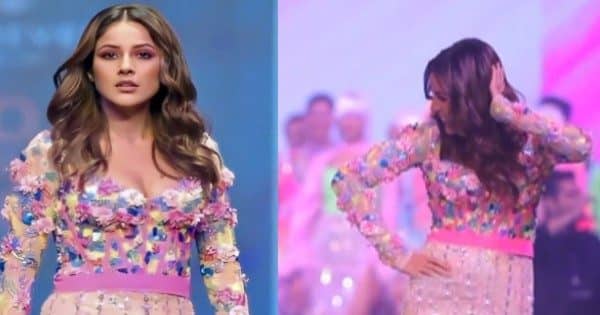 Shehnaaz Gill Viral Video: Actress Shehnaaz Gill is making a lot of headlines these days for her song ‘Ghani Sayani’. A video of Shahnaz is becoming increasingly viral on the internet, in which she is seen doing giddha on the ramp.

Shehnaaz Gill, popularly known as Bigg Boss 13 fame and Katrina Kaif of Punjab, remains very active on social media. His photos and videos make a lot of noise on the Internet. Now Shahnaz Gill has posted a new video on her Instagram account. In this video, Shahnaz is seen walking the ramp. Let us tell you that Shahnaz Gill walked the ramp for Ken Ferns’ The Indian Designer Season 4 in Delhi and she became the show’s stopper. During the ramp walk, the actress was wearing a pink colored mermaid gown, in which she was looking very beautiful.

In this video Shahnaz Gill (Shehnaaz Gill) is seen walking the ramp with great confidence. Sharing the video, the actress wrote in the caption, “Thank you everyone.” This style of Shahnaz Gill is very much liked by the fans and people are praising Shahnaz fiercely for this look. One user wrote, “You deserve all the happiness in the world.” While another user wrote, “You rocked the ramp, I was very excited and it was fun running with Ken.”

Shehnaaz Gill did Gidda on the ramp

Another video of Shehnaaz Gill from the Cane Ferns Fashion Show is going viral. In this video Katrina Kaif of Punjab is seen showing her desi style on the ramp. In the video, Shahnaz is doing Gidda on the ramp. It can be seen in the video that Shahnaz Gill is dancing with Ken on the ramp. Everyone is praising this cute style of the actress in the video.

Talking about the work front, actress Shahnaz Gill is going to make her Bollywood debut soon. Shahnaz will be seen in the film ‘Kisi Ka Bhai Kisi Ki Jaan’ alongside Salman Khan. The film will release at the box office next year. Apart from this, Shahnaz Gill will also be seen in the film 100%, in this film the actress will work with John Abraham and Riteish Deshmukh.